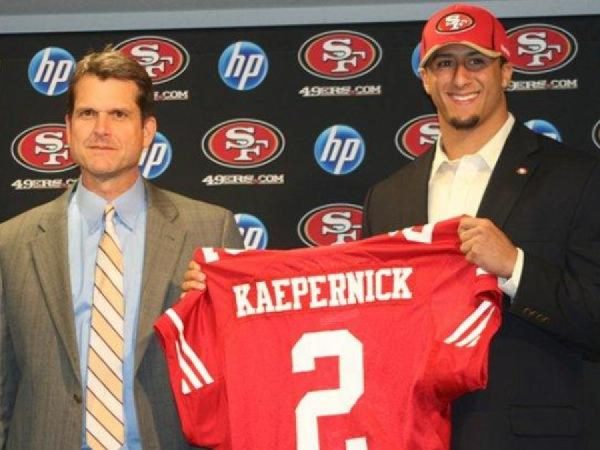 It's amazing just to stop and think that Colin Kaepernick, a Pitman High School product, will be playing in the Super Bowl this Sunday.

But it's really more than that, isn't it?

Kap won't just be playing in the Super Bowl. He'll be a starting quarterback, arguably the most important player on the field.

And, more than that, he'll be the starting quarterback for the San Francisco 49ers, a team legendary for its quarterbacks. In just his tenth career start, the kid from Turlock is in the same rarefied airs as National Football League legends Steve Young and Joe Montana.

But for those of us who have watched Kap grow over the years, reaching the Super Bowl seemed almost destined for the never-say-die kid from Turlock.

Sadly, I moved to Turlock in 2007, just after Kap's high school career came to an end. When I first heard of him it was in a passing reference to some kid from Turlock who was the backup quarterback at the University of Nevada, Reno.

Then, by chance, as I flipped through the channels one October evening, I caught the end of Kaepernick's first college start. In four overtimes, Kap's Wolf Pack nearly upset the nationally-ranked Boise State Broncos, by a score of 69-67. It was only Kap's exceptional play that kept the game close.

The city-wide excitement about the “kid from Turlock” grew over the years.

In 2008, Kap became the fifth player in NCAA history to pass for 2,000 yards and rush for 1,000 more – despite playing the second half of the season with an injured ankle. The following year saw another 2,000/1,000 yard season, making Kaepernick the first player to ever post back-to-back seasons surpassing that mark.

But it's the 2010 season that will always have a special place in my heart.

It was in 2010 when I got to see Kaepernick play, in person, for the first time. The Wolf Pack had traveled to Fresno State for a Western Athletic Conference contest which could have determined the conference title.

People often say that Kap is a quick runner. That his speed is “deceptive.” That the balls he throws move “surprisingly” quickly.

But when you're down on the field, watching Kaepernick move, it becomes apparent that he's not just quick. He's one of the fastest people you'll ever meet. I honestly had troubles keeping him in focus on my rather-nice camera.

And he never breaks down. Even when trailing 34-28 in the fourth quarter, following a 10-point run by Fresno State, Kap wasn't rattled. He just marched his Wolf Pack down the field, converting two third downs in the process, to take a 35-34 win.

I'd see Kaepernick play again that year, in the 2011 Kraft Fight Hunger Bowl. And while Kap again played outstandingly, it was something else that caught my attention after that game – the sheer, unadulterated joy on Kaepernick's face as he hefted the bowl game trophy amidst a sea of photographers. He's a guy who loves to play the game. Period.

By the end of Kap's collegiate career, the lanky quarterback, the one who only earned one college scholarship, had become the first Division I player to record 10,000 passing and 4,000 yards rushing.

The rest of the story is well-known.

Continuing to fly under the radar, Kap was drafted by the San Francisco 49ers in the second round of the 2011 NFL draft. After riding the bench for a season as Alex Smith's backup, Kap seized his opportunity in 2012 when Smith was injured, and coach Jim Harbaugh “rode the hot hand” by letting Kap continue to start, even after Smith's return.

And in the first round of the playoffs, Kaepernick made history once again. Running roughshod over the feared Green Bay Packers, Kap recorded 181 yards rushing – the most by a quarterback in a single game, ever.

Now only one question remains: Can Kaepernick make history again, leading the 49ers to their sixth Super Bowl title?

Of course, Kaepernick can't quite claim to be on the same level as the 49ers' past QB greats quite yet.

But a win on Sunday would fill out the list of Super Bowl Winning San Francisco Quarterbacks quite nicely: Montana, Young, and Kaepernick.