Turlock Express One Win from Playoffs 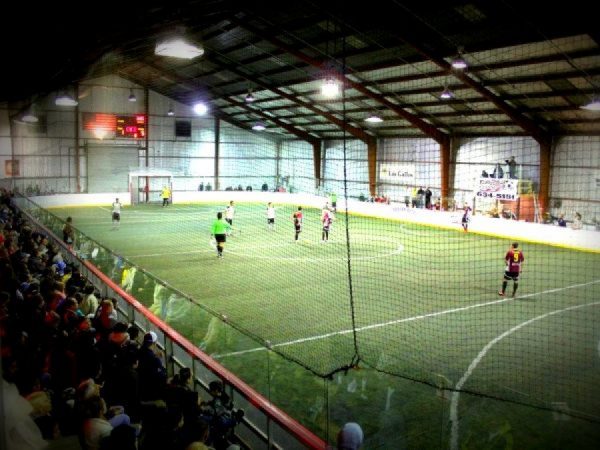 Turlock's only professional sports team is one game away from making a second consecutive playoff bid.

If the Turlock Express defeat the Sacramento Surge on Saturday, the second-year team will become two-for-two in reaching the Professional Arena Soccer League Playoffs.

The PASL brings teams together from as far away as Pennsylvania, Mexico, and, yes, Turlock. Last year, the Express were defeated by Revolucion Tijuana 5-4 in the divisional playoffs.

But this year the Express – and a growing group of fans – are hoping for bigger things.

“The people that are going are really starting to like it,” said Express Head Coach Arturo Pulido. “They're really getting introduced to something different.”

Arena soccer is played on a hockey rink-sized field, surrounded by walls. The ball remains in- play even if bounced off the wall.

The game has only six players per side, rather than 11 in traditional soccer. And substitutions can occur at any time – much like line changing in hockey.

Though the rules may seem different to fans of the “beautiful game,” it's a high-scoring style familiar to Turlock soccer fans. Arena soccer is the game of choice at Turlock Indoor Soccer, home to the Express.

About 400 fans pack Turlock Indoor Soccer for the average game. It's a far cry from the league best San Diego Sockers, who draw upwards of 4,000 fans to some games, but Pulido noted attendance is growing. Major sponsors, like the Turlock Poker Room, help Turlock retain its only pro sports team while a fan base builds.

“People are still learning about it,” Pulido said.

As fans learn, they find out that the quick-shooting Express have three of the top fifteen scorers in the league – Ivan Campos, number three overall, Adrian Guitierrez, at number seven, and Bronil Koochoie, at number 14. Campos is originally from Watsonville, while Guitierrez is from Livingston and Koochoie is from Turlock.

“The majority of the team is local talent,” Pulido explained.

And that talent gives back to area youth, through such events as the Turlock Express Soccer PRO-gram. The program brings children age 5 to 12 together with the soccer pros, to help learn how to become a better player.

“That's an experience for them,” Pulido said. “Most of the kids that are coming to this have seen them play.”

The Express (8-7) should have a leg up on Sacramento (1-13) this weekend. But Pulido expects a hard-fought contest as his team travels to the capitol.

“Hopefully we win,” Pulido said, “but every time we play Sacramento it's a good game.”