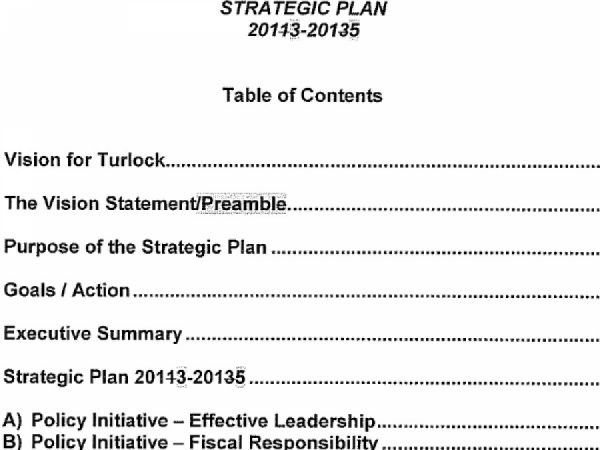 Turlock City Councilmembers approved an updated Strategic Plan on Tuesday, intended to serve as a road map for the future by assessing the city's strengths, weakness, and opportunities.

The updated plan will guide Turlock for three years, up from two years in previous plans. Councilmembers will revise the plan annually, tied into budget discussions.

The plan is largely the same as previous plans, save for improvements to readability and the addition of a few new projects and initiatives.

Those initiatives range from the creation of a Community Facilities District to ensure ongoing police, fire, and park maintenance services, to the creation of a five-year economic development plan to promote retention, expansion, and development of new businesses. The plan also suggests developing a new bicycle master plan, pursuing opportunities to enhance emergency medical services, and evaluating the development of public recreation facilities – like a city golf course.

The proposed Strategic Plan, which differs little from the approved plan, is available for review online at http://turlock.ca.us/pdf/downloadpacket.asp?dept=CityCouncil&id=302.

Meetings to Start at 6 p.m.

Meetings will now start at 6 p.m., rather than 7 p.m., following unanimous council approval.

The earlier start will benefit staff, councilmembers, and the general public by allowing meetings to end earlier, according to city staff.

The measure was on the Turlock City Council's consent calendar, and was not discussed.

Turlock will spend an additional $33,936 to participate in preparing the East Stanislaus Integrated Regional Water Management Plan, on top of $52,636 already spent.

The additional costs come as the State of California has added new requirements to the plan, not previously budgeted for. The plan was nearly complete before California changed the law.

Completing the plan could open up millions in state grant funding for projects like a surface water treatment plant.

The plan has been in development since July 15, 2010. Ceres, Hughson, Modesto, and Turlock are all partners in the plan.

Previous plans called for a dedicated pipeline to convey the water, but a study found that using the Delta-Mendota Canal would be more cost-effective, allow for year-round discharge of recycled water, and could use water to augment wildlife reserves.

Turlock will pay $3,000 to the State Water Pollution Cleanup and Abatement Account as a settlement for exceeding wastewater discharge limits.

A $3,000 fine is the minimum allowable under state law. Some local agencies were recently fined up to $300,000 for errors, according to Municipal Services Director Dan Madden.

The exceedance came due to an operational error, when a dechlorination system was not active for 56 seconds due to maintenance on a pump station. Turlock exceeded the maximum by .005 milligrams of chlorine per liter, or roughly 4 pounds in 1 million gallons of water.

“As we say in the industry, bio-solids happen,” Madden said.

On Tuesday, the Turlock City Council also:
• Issued a proclamation recognizing Dating Violence Awareness and Prevention Month.
• Finalized an ordinance amending Turlock Municipal Code to increase building permit fees. A second ordinance, allowing animal rescue groups to operate in Turlock boundaries, was also finalized.
• Began the process to change city Municipal Code regarding the sales of fireworks, capping the number of sellers at 35. The cap is currently 50, though no more than 27 have ever applied.
The change would also make it easier for nonprofits to qualify to sell fireworks, requiring a tax exemption certificate from either the California Franchise Tax Board or the Internal Revenue Service, but not both.
• Authorized staff to support Enterprise Zones, opposing any state proposal to threaten their existence.
• Approved filling three vacant maintenance worker positions in the Parks, Recreation, and Public Facilities Division. The city will first look to hire in-house before undergoing a formal recruitment process of outside candidates.
• Conducted an annual performance evaluation of City Manager Roy Wasden. The evaluation occurred in closed session, with no report out.
• Discussed ongoing litigation on Turlock's new General Plan from the California Clean Energy Committee. The Committee is a Davis-based nonprofit which alleges that Turlock does not do enough to protect agricultural land in its new plan.
The discussion occurred in closed session, with no report out.