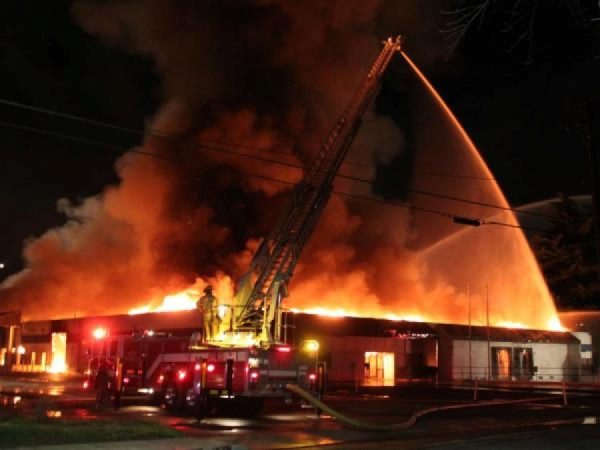 The old cheese facility next to Evergreen Packaging (formerly the International Paper facility) on West Main Street is on fire.

The fire started roughly around 7:30pm. Firefighters are battling the blaze and no further information is available as of 8pm. Multiple agencies have responded huge fire.

Citizens are being advised to stay clear of the incident.

Downtown Turlock was masked behind a billow of smoke clouds Tuesday night as the old cheese factory next to Evergreen Packaging on West Main Street burned.

The fire started roughly around 7:20 p.m., with flames soon reaching seven stories high. West Main Street was closed by the Turlock Police Department between Soderquist and Tully Roads, as citizens were advised to stay clear of the incident.

The burned building was formerly home to the Lactalis USA cheese factory. The approximately 10,000 square foot building is now completely burned with the exception of the outer frame.

“Investigators have deemed this to be a suspicious fire,” Lewis said. “Witnesses were interviewed last night to determine the cause of the fire.”

Multiple agencies responded to the fire yesterday evening, including Ceres and Modesto Fire Departments who responded to provide mutual aid.

According to Lewis, there were at least three detectives on scene and approximately 14 other police personnel ranging from volunteers to patrol units and a watch commander. Officers assisted with containing the outer perimeter of the crime scene, while volunteers assisted with closing down streets and traffic control.

“This was a three alarm response for Turlock Fire Department,” said Lewis.