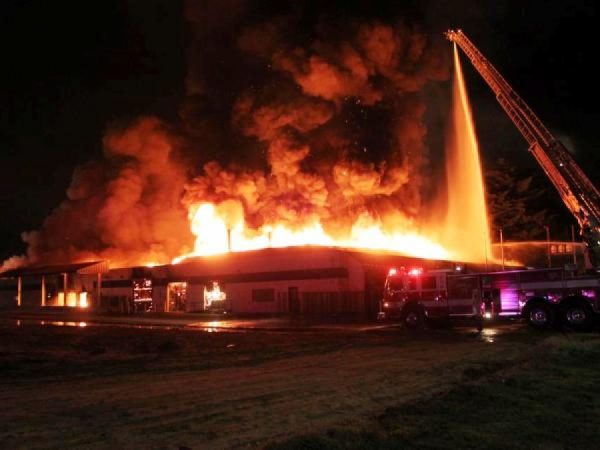 A verbal argument occurred between one of the female suspects and a male victim, which quickly escalated into a physical altercation between the two.

The male victim fled into the vacant building during the fight to hide within the rafters of the building. The three women who were arrested worked together to intentionally light the building on fire, knowing that the male victim was hiding inside, Lewis said.

The male victim escaped the building with no physical injuries. The three women – Lanette Sullivan, 46 of Turlock, Wanda White, 45 of Turlock, and Erika Clardy, 24 of Turlock, were brought into the Turlock Police Department today for questioning and were arrested immediately following the interviews. The three women are currently being held at the Women’s Public Safety Center in Modesto.

Forcible entry and an offensive fire attack were made, but conditions deteriorated when the roof collapsed due to the flames.

According the Turlock Fire Department, the incident commander pulled the interior crews from the building and set up for a defensive fire attack. Fire engines and personnel were placed around the exterior of the building to help retain the fire.

With roughly 900,000 gallons of water used, the fire was successfully brought under control.

The estimated dollar loss caused by heavy damage to the structure is projected to be $5 million. Turlock Fire Department responded with a fire chief, division chief, two battalion chiefs, four engine companies, and nine off-duty firefighters. Fire units from Modesto and Ceres also responded for a total of 29 personnel on scene.

Officer Lewis also shared that the Turlock Police Department knows that other individuals were present within the building at the time of the fire, and are still investigating those involved.

The Turlock Police Department is asking that anyone with information regarding the incident or those involved please call Officer Frank Navarro at 209-668-5550 ext. 6619