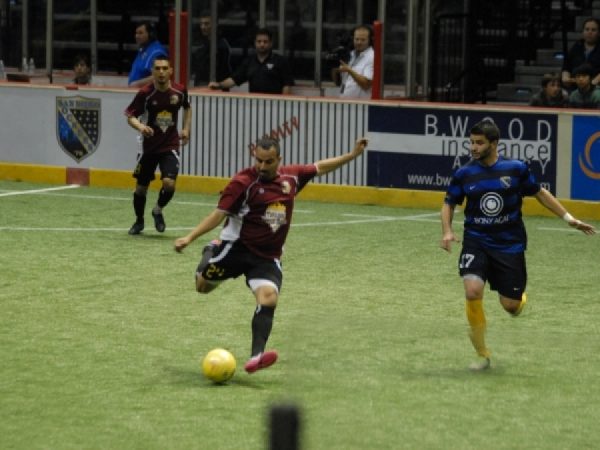 Though the league announced the All-League rosters on Tuesday, Campos first learned of his spot when contacted by TurlockCityNews.com on Wednesday.

“I'm surprised,” Campos said. “I know I did good in the league and scored a lot of goals, but I never thought I'd make all-league, first team or second team.”

Campos, a Watsonville native, led the Express to the PASL Ron Newman Cup playoffs with 33 goals and 15 assists in 16 regular season games. Campos's statistics were good enough for Campos to claim third in the league in goals, and sixth in the league in total points with 46.

Campos's playoff performance, if possible, was even sharper. In game one of the Express's two-leg playoff with the San Diego Sockers, Campos finished with 5 goals and 1 assist, almost leading Turlock to an upset of the massively favored Sockers. In game two Campos booted another goal despite being double and triple-teamed all night.

The high-scoring season was a change of pace for Campos in more ways than one.

Campos had seen success in outdoor soccer, being named to the National Soccer Coaches Association of America Men's Junior College Division III All-America Team in his one season at Hartnell College, in Salinas. Campos also played two years with the Santa Cruz Breakers in the fourth-tier professional National Premier Soccer League, and four years with the Salinas Valley Samba.

But before joining the Express, Campos had only played in recreational, amateur indoor soccer leagues in Watsonville. That experience didn't prepare Campos for the quick-fire substitutions common to professional indoor soccer, like line changes in hockey.

“At first, it was hard to adapt because of the subs,” Campos said. “It's really hard, especially coming from a league where you play most of the game.”

“With the help of my teammates it got easier every day,” Campos said.

The other big change: Campos was never a scorer before joining the PASL. He always played the role of the creative set-up man, never the one taking the shot at the end of the play.

“My coaches always told me that I had it in me, being a goal scorer, but I saw myself as more of a playmaker,” Campos said.

The smaller field and faster pace of indoor soccer makes every player a potential goal scoring threat, however, finally giving Campos his chance to shine.

Campos was the only Express player named All-League. He expects to play for the Express again next year.