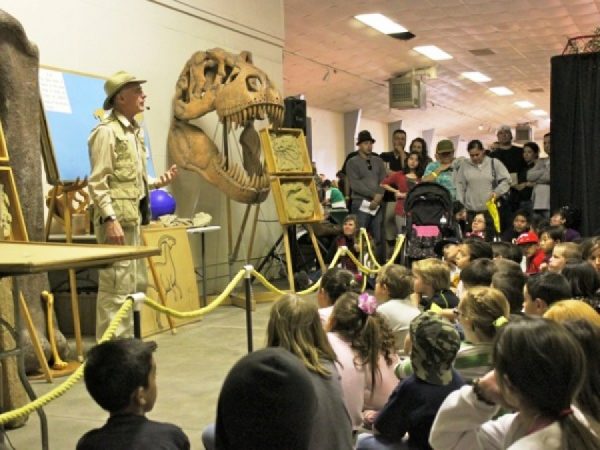 “We had about 700 more paid attendees this year than last year,” said Terry McMillin, co-chair of the Turlock Gem and Mineral Show. “We ran out of wristbands the first day and had to go out to buy more. We did not anticipate that much of an increase but it was fantastic to see.”

McMillin said that approximately 8,500 paid adults attended this weekend’s event, which was held on both Saturday and Sunday. Total attendance was much, much higher, as children under the age of thirteen were admitted free.

“It was just amazing to see families come out, smiling and enjoying everything,” said McMillin.

The event showcased 43 vendors altogether, with unique items for sale ranging from only fifty cents to specialty items, such as dinosaur fossils, costing a hefty $950.

“It’s a very profitable show for vendors,” said McMillin. “We had one vendor selling geodes at $300 a piece, and nearly all of those sold out. We also have another vendor who has been coming to the show every year since the beginning of the event – that’s 47 years.”

The annual event is held by the Mother Lode Mineral Society at the Stanislaus County Fairgrounds, and is one of the largest gem shows in the State of California.

With a devotion to education, the Mother Lode Mineral Society and its members help educate the public in many areas including earth science, lapidary arts, gem carving, fossils, geology, florescent minerals and much more.

“When you see that many people come out to an educational event, it’s marvelous,” said McMillin. “We try very hard to make sure that the kids have fun and learn, whether they are carving soapstone or learning about magnetism, they’re learning and having fun.”

Children and adults of all ages had the opportunity to see and learn about something new at the Turlock Gem and Mineral Show, from various rocks, minerals and fossil specimens to dinosaur bones, ancient artifacts and other field-collected items.

On Saturday over 400 children and adults gathered to listen to guest speaker Richard Wade give an interactive, fun and educational presentation discussing how dinosaurs lived. Wade also gave a presentation on volcanoes during the event.

“There are not a lot of children in our community who have the opportunity to go to a museum,” said McMillin. “So we bring a museum to the community and the kids, and parents, love it.”

Neal Larson, one of the top paleontologists in the world, was also at the Turlock Gem and Mineral Festival over the weekend, where he signed books and displayed some of his own personal collection of dinosaur bones and fossils.

“One young boy named Ethan, who is a big fan of Neal Larson, had a book signed by him during the event,” said McMillin. “After having his book signed, he was so happy that he was shaking and his eyes were misty. It just doesn’t get better than that.”

The Mother Lode Mineral Society currently has approximately 300 members, including 45 junior members who are elementary to middle school students.

“We would like to send out a huge thank you to the community,” said McMillin. “If it wasn’t for their support, we couldn’t do this year after year.”