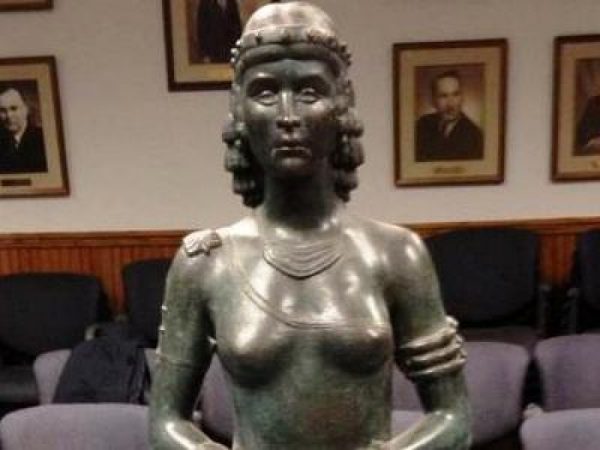 A City of Turlock subcommittee has developed a list of seven potential sites for a donated statue of Queen Shamiram, the first female ruler of the Neo Assyrian Empire.

But the subcommittee’s first choice for the 9-foot tall bronze is still California State University Stanislaus, despite the university previously stating they have “no interest” in the artwork.

“We all unanimously agreed that the University would still be the best place,” said Turlock Parks, Recreation and Community Programs Commissioner Andrew Davoodian.

Davoodian, who sits on the siting subcommittee with another Parks commissioner and three Turlock City Arts Commssioners, said that the committee hopes to meet with the office of CSU Stanislaus Interim President Joe Sheley to discuss the statue.

Should that fall through, the subcommittee drafted a list of seven potential city-owned sites for the statue: the Senior Citizens Center, Donnelly Park, the Turlock Transit Hub, a plot at the corner of Canal Drive and Colorado Avenue, Gettysburg Park, Centennial Park, or the new Public Safety Facility.

Each site has its pros and cons. Commissioners feared that Donnelly Park could be a problem due to bird droppings accumulating on the statue, for example. Centennial Park and the Turlock Transit Hub may both offer good visibility for the statue, adjacent to major thoroughfares.

“As time goes on, this list will be refined to the point where we select a place,” explained Turlock Parks, Recreation and Community Programs Commission Chair Barney Gordon. “Once the commission selects a place, we will have a public hearing on the location.”

The subcommittee is expected to return with a narrowed list of about four potential sites at next months’s meeting of the Parks, Recreation and Community Programs Commission on April 10.

Regardless of the site selected, it is expected that statue donor Narsai David, a chef, radio, and television personality, will pay for all costs associated with installation.

Members of the Assyrian community supported all seven suggested city-owned locations, but still voiced a preference for placing the statue on the CSU Stanislaus campus.

“My preference is the Stanislaus State University,” said Assyrian American Civic Club Member Yooash Stepans. “That’s a really good place for this statue to be.”