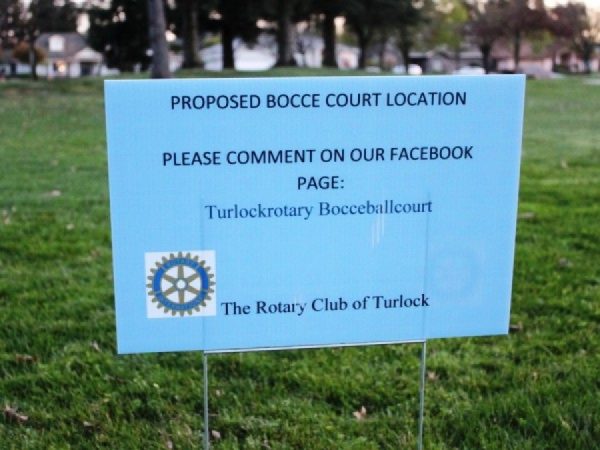 Following a community uproar over plans to site a bocce ball court at Crane Park, the Turlock Rotary Club has narrowed a list of potential sites to three local parks: Bristol Park, Dale Pinkney Park, and, once again, Crane Park.

The club hopes to receive public comment on the proposed locations – this time before holding a public hearing.

“We wanted to take a step back, and we wanted to make sure that we took a good look at our options as a whole,” said Mike Dini, a Turlock Rotary member who is spearheading the project.

In the coming days, Turlock Rotary Club members will mark the proposed footprints of the side-by-side, 65-foot by 10-foot bocce ball courts, at each park. Inside of each footprint Rotary members will place a lawn sign, inviting people to comment on a Rotary-operated Facebook page.

“We can get updates on what people are saying, pro and con,” Dini said. “It's a place where people can express concerns and support for particular locations.”

Last time the Rotary proposed a potential site – Crane Park – they were taken by surprise at a July 2012 public hearing when neighbors came out of the woodwork to oppose the courts.

“Regardless of which area is chosen for this wonderful project, there will be people that have concerns,” Dini said.

Crane Park neighbors are still opposed to the project, arguing that the park is already overused.

“In our neighborhood, there's very little support for this,” said neighbor Stan Grant. “Actually, none.”

Grant conducted a survey of all of Crane Park's immediate neighbors. All but one were against siting the bocce ball court there, he said, and that one was neutral on the subject.

Given the lack of support, Grant requested Crane Park be removed from consideration. No comment was made on his request.

In selecting a site, Rotary Club representatives are looking for a tree-free, level area of ground, not frequently used for other recreation. Rotary Club members also hope to site the parks adjacent to a paved walkway, so disabled individuals could easily access the wheelchair-accessible courts.

“It's a fun activity for all ages, capabilities, and abilities,” Dini said.

And Rotary members are also hoping to find a site somewhat near a high school, so their teenage Interact Club members can help construct and maintain the courts.

The project has its roots in a new worldwide Rotary Club initiative, which looks to create lasting amenities in communities. The Rotary has offered to pay for all costs associated with the courts' installation.

“We've been challenged in recent years not to just write checks, but to find meaningful projects,” Dini said. “ … Something tangible, something people can associate with the international Rotary.”

But the project hinges on finding a suitable location for the courts, where the Italian game of bocce ball is played, rolling wooded balls down a lane. The goal of bocce ball is to roll one's own balls closer to a target ball – the pellino – than an opponent.

The Rotary Club hopes that at least one of the five proposed locations will be acceptable to the community.

“We'd like to have Turlock be at the forefront of something that's really neat and fun,” Dini said.