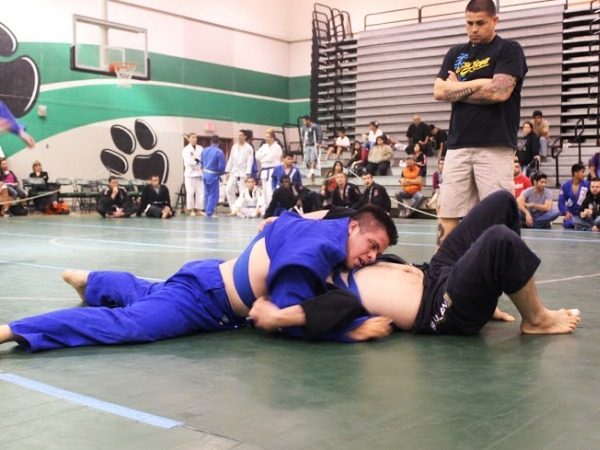 And though Brazillian Jiu-Jitsu practitioners from across the state competed at the tournament, a local Turlock resident took first place.

Jorge “Rocky” Lopez, 25 of Turlock, has been training jiu-jitsu for 5 years, along with 3 years of intermittent wrestling experience. Currently training at the Turlock Academy of Jiu Jitsu, Lopez has a strong dedication and passion for the sport.

“I have always been attracted to aggressive, full-contact combat sports,” said Lopez. “It has always been greatly therapeutic and a powerful stress reliever from school, work, and all other sources of life problems. In other words, it helps you forget all of your troubles.”

Although Lopez has attended previous CBBL tournaments, Saturday was the first time he had ever competed in one.

“I thought the tournament was good considering a jiu-jitsu tournament in Turlock would have been unheard of 4 or 5 years ago,” said Lopez. “It’s a testament to the growth and accessibility of Brazilian Jiu-Jitsu.”

The sport has increased in popularity over the years, as jiu-jitsu is one of the main components of Mixed Martial Arts, which has gained recognition across the nation through the rise of the Ultimate Fighting Championship. The Turlock Academy of Jiu Jitsu, which just opened earlier this year in downtown Turlock, has already gained numerous students of all ages to train with instructor and black belt Alejandro Perez.

“Jiu-jitsu allows a lot of people to deal with the stresses that come along with life,” said Lopez. “Whether it’s school, the economy, almost anything you name that gives you stress can be dealt with by just training with your jiu-jitsu family. It is especially good for turning around the lives of troubled children and at-risk youth.”

“Besides placing, I learned what I need to work on, and I learned more about myself,” said Lopez in regards to the tournament. “Thank God that He was with me, not to help me win my victory but giving me courage to face my fears – the consequences of losing a fight.”