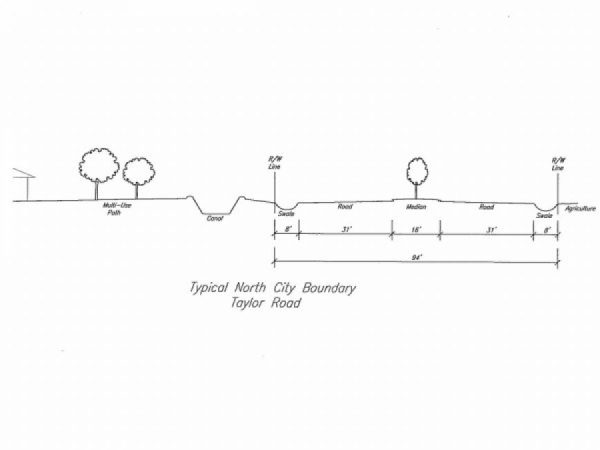 Landowners voiced concern with a proposed widening of Taylor Road on Tuesday, which would expand the road to a four-lane expressway, consuming agricultural land.

But the general concept of a Taylor Road expressway has already passed council approval, leaving only the question of how much land the expressway will take up.

“We're not, tonight, talking anything about taking land,” said Councilmember Forrest White. “… We're talking about reducing (the expanded Taylor Road's width) from 108 feet, potentially, to 94 feet. In essence, by doing this, we're making it less potential ground to be taken away.”

Turlock's General Plan, approved in 2012, calls for Taylor Road to eventually become a four-lane expressway. The road would be widened entirely to the north, due to the Turlock Irrigation District canal that runs along the south side of Taylor Road, taking land from mostly agricultural uses.

The General Plan proposal called for Taylor Road to be widened to 108 feet, encompassing two vehicle lanes and a bike lane in each direction, a median, and curbs and gutters. The widening would occur from Geer Road to Golden State Boulevard, and from Taylor Court to Washington Road.

The proposal approved by council on Tuesday reduced the amount of land to be used to 94 feet, replacing the curbs and gutters with an eight-foot swale on each side. The swales will help maintain the agricultural feel of the area, Turlock staff said, while continuing to establish Taylor Road as a northern boundary beyond which Turlock will never expand.

The boundary aspect was important to Mayor John Lazar, who sat on the council when Taylor Road was first set as Turlock's northern boundary. The firm boundary allows Turlock to better plan, to reduce sprawl, and to build transportation and municipal services infrastructure knowing the city will never extend beyond Taylor Road.

“We didn't necessarily want to be like Modesto,” Lazar said. “… We thought this was best for Turlock, and I still believe it's best for Turlock. I think this is well thought of, unfortunately it affects people's property.”

Even the reduced land usage drew concerns, from Turlockers like Mike Reed. Reed's family has owned a patch of land on the corner of Geer and Taylor Roads for 40 years, with Reed's mother still living in a home on the property.

City staff acknowledged impacts, but said the widening is needed to improve traffic flow as the city continues to gain more residents. And establishing the width of Taylor Road now will allow landowners to plan accordingly for future development.

“Whether it's 108 (feet) or 94 (feet), there are going to be some serious impacts,” City Engineer Mike Pitcock said. “What we're trying to do is set that line for all future improvements.”

Though construction of such an expressway is likely far away, the Turlock City Council's Tuesday action was driven by plans for expansion at Turlock's Taylor Veterinary Hospital, which sits on the north side of Taylor Road.

Craig Brooks, who owns Taylor Veterinary Hospital, said he's seen the constant backups on Taylor Road and understands the need for widening. But the 108 feet originally proposed for the expressway would significantly impact his hospital's operations.

“(The 94-foot width) comes pretty close to our front gates,” Brooks said. “… If we were to adopt the 108 feet, that would require the destruction of the front portion of our veterinary hospital.”

The 94-foot width will allow Taylor Veterinary Hospital to remain in its current building, while leaving room for a new building to be constructed on the property.

The reduction in space needed for the roadway was approved 4-1, with Councilmember Bill DeHart dissenting. DeHart said Turlock needed to consider all impacts on other businesses along Taylor Road before setting a roadway width.

It will likely be at least 30 years before the expressway is built. At that time, Turlock would compensate all landowners for their property, and pay to relocate or demolish any structures which would be impacted.

“The people in this room will either be dead or in walkers by the time we get to this project,” White said. “It's morbid, but it's factual.”