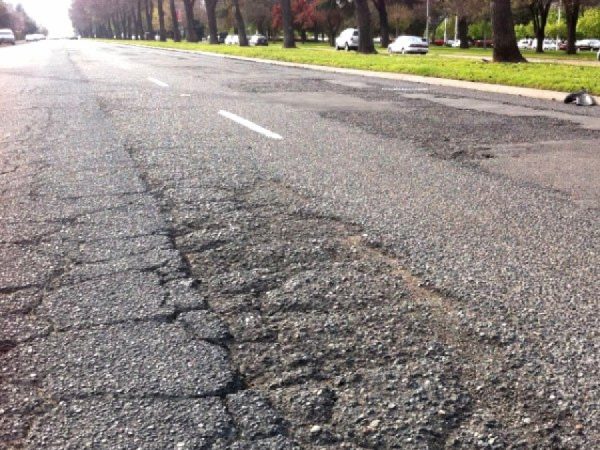 But Turlockers were divided on the issue this week, as the City of Turlock held a special meeting to discuss a potential roads tax and other critical issues.

“One of the things I hear quite frequently is 'We pay enough taxes,'” Wasden said. “'There should be enough money to take care of these critical needs in my community.'”

But the City of Turlock receives only a tiny percentage of tax dollars collected in town, Wasden said, showing charts on a PowerPoint presentation.

Of the $215 million in property, sales, and state income taxes collected in Turlock last year, the city saw only $13 million enter its coffers. The remainder went to other taxing agencies – predominantly the state.

“It doesn't stay here in our community,” Wasden said.

Turlock generated $74.5 million in sales tax last year. Only $9.5 million of that stayed in Turlock.

Property tax revenues are even smaller. Of $45.6 million in property taxes assessed to Turlock parcels, just $3.6 million remained in the city.

Gasoline tax revenues are no better; of the 36.4 cents collected per gallon. Turlock receives just 2.35 cents.

And the $108 million in state income tax collected?

“None of that stays in Turlock,” Wasden said. “All of that leaves Turlock.”

In total, Turlock has about $30 million in discretionary funding – Turlock's General Fund – each year. More than 80 percent of that goes to employee salaries, paying for police officers, firefighters, building inspectors, janitors, and parks maintenance workers.

That leaves no spare change to increase road funding without cutting other services – or finding new funding.

“The use of General Fund dollars (to improve roads) would require a reduction in other areas,” City Engineer Mike Pitcock said. “Those things are meaningful.”

And to simply maintain Turlock's streets at their current state would cost $10 million each year – one third of Turlock's entire discretionary budget. The city spends about $2 million annually on major road repairs, and $1.1 million on emergency pothole repairs and road restriping.

Turlock has a few options for a new tax to improve the city's roadways.

The city could adopt a flat per-parcel tax, which would be approximately $402 per year, per parcel, raising $8 million annually. A parcel tax could instead be weighted per square-foot, at around $162 for the average parcel but $9,400 for a 10-acre parcel.

A new half-cent sales tax is another option. But the sales tax would raise only about $5 million annually – less than is needed to maintain streets at their current level.

However, with a new sales tax Turlock would qualify as a “self-help” city in California's eyes, opening up millions more in matching state funds. That state road funding is currently unavailable to Turlock, as it is dedicated to “self-help” cities where residents tax themselves for roads.

Any new tax would need to be approved by two-thirds of Turlock voters.

Of three speakers at Tuesday's meeting, two supported a sales tax – precisely the percentage needed to make a tax happen.

Turlocker Dewey Rowe, who has lived here for 45 years, says he's seen the streets go bad in the last 10 to 15 years. He supported a sales tax, which he said would likely cost Turlockers less than the car repairs forced by bumpy roads.

“I think this is the way to go,” Rowe said. “You can assess the property owners, but everybody uses to streets, even out in the county. If you're going to use the streets, you should pay for them.”

Former Turlock councilmember Kurt Spycher felt differently. He pointed to the near-vacant Dutcher Middle School cafeteria – about 10 Turlockers attended Tuesday's meeting – as a sign of residents' lack of interest in a tax.

“Our problem is in Sacramento and D.C. And really, in my opinion, our efforts should be placed in holding our elected officials responsible.”

A property tax is flawed, Spycher said, because it would impact those who own property here but do not live here or use the streets. A per-square-foot property tax would be worse, impacting low-income elderly homeowners with large parcels on the West Side.

A sales tax could put Turlock at a competitive disadvantage for businesses, Spycher said, with shoppers buying elsewhere to avoid the tax. And voters already rejected a countywide transportation sales tax in 2008.

But the 2008 tax failed by only a few hundred votes, said Bruce Abanathie, a transportation planner who lives in Turlock. He believes there is support in Turlock to pass a roads tax.

“If there's a sales tax measure in this town, I'm still going to shop in it,” Abanathie said. “We have an opportunity to help our city, and I think we should take it”

Abanathie said Turlock is already effectively delivering services, but is hamstrung by a lack of funding. By opening Turlock up to the “self-help” funds, he says Turlock's roads may finally improve.

Councilmember Steven Nascimento believes there is support for a roads tax in Turlock.

“One of the things I've heard from almost every resident I spoke to when I ran for office is that the condition of our roads is unacceptable,” Nascimento said. “And it's something I strongly agree with.”

And though fixing Turlock's property tax inequity would be ideal, San Francisco and Los Angeles representatives outnumber those from the Central Valley significantly, said Nascimento, who works for State Sen. Anthony Cannella (R-Ceres). There simply isn't the political will to make it happen.

Tuesday's meeting was the first of four planned outreach meetings to discuss a proposed roads tax and other critical issues facing Turlock departments. In addition to the roads discussion, representatives from every city department discussed challenges they face, ranging from stagnant crime rates to declining water quality.

“The best thing we can do is to get a lot of people to give us a lot of information. The more input we have, the better.”

The remaining meetings to discuss critical issues facing Turlock are scheduled for: 6 p.m. May 9, at Westside Ministries, 6 p.m. May 30, at the Turlock Senior Citizens Center, and 7 p.m. June 13, at Pitman High School.