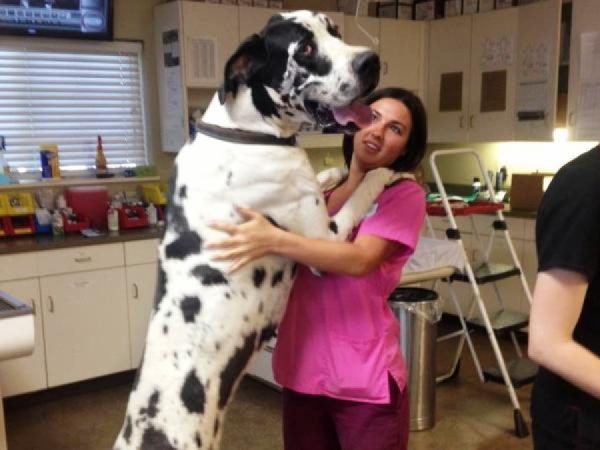 Social media sites bring people together in numerous ways, whether it be reconnecting with an old friend from high school, or staying in contact with distant relatives.

More recently in Turlock, the use of social media helped bring back together a lost pet and his owner after thousands of community members virtually shared the photo of the lost dog – a Great Dane – in hopes of finding its home.

The Great Dane was dropped off at Monte Vista Small Animal Hospital on Saturday after being found wandering around on Golden State Boulevard.

“We immediately checked him over to make sure he was healthy and not injured,” said Sara Leimgruber, the Hospital Director at Monte Vista Small Animal Hospital. “We then scanned for a microchip, and there wasn’t one. He was also not wearing a collar.”

After nearly 3,300 shares of the photo of the Great Dane that Monte Vista Small Animal Hospital posted on their Facebook page, the owner of the animal was finally made aware of the numerous people who were trying to reunite him with his dog. The owner had a friend tell him about the Facebook post and he called Monte Vista Small Animal Hospital. The veterinary hospital referred him to Turlock Animal Services where the dog was being held.

On Friday, nearly a week after the Great Dane was found and brought in to the Monte Vista Small Animal Hospital, the dog's owner called the Turlock Animal Shelter to be reunited with his pet.

The owner told an employee at the Turlock Animal Shelter that he had been visiting a friend in Turlock when his dog got away from him. Being from Ceres, the man said that he was unaware that Turlock had an animal shelter to help find his pet.

Had the owner arrived just a day later, the Turlock Animal Shelter would have allowed the dog to be put up for adoption in accordance with state law.

“If the owner had just bought a 15 dollar microchip prior, all of this could’ve been avoided,” said Turlock Animal Shelter supervisor Glena Jackson. “Or if the animal just had its tags on. As a pet owner, it is your responsibility to make sure that your pet is properly tagged or chipped in case of situations like this.”

The man claiming to be the pet owner was confirmed by the Turlock Animal Shelter to be the rightful owner of the Great Dane, and the two are in the process of finally being reunited.