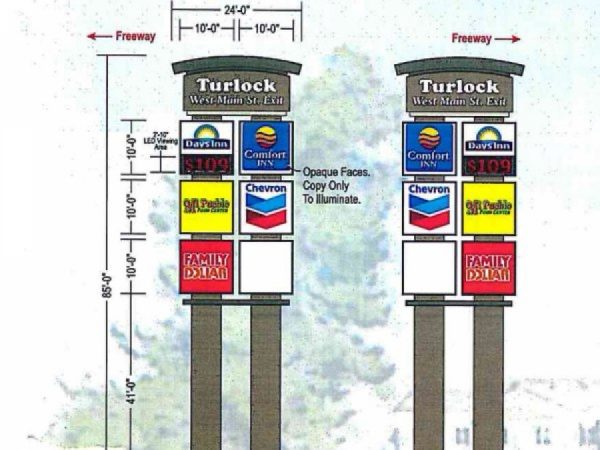 After months of Turlock Planning Commission review, a new highway sign was approved for the Days Inn on West Main Street Thursday, much smaller than developers had initially sought.

The approved sign is 85 feet tall, 24 feet wide, and comprises 1,000 square feet of advertising space. The sign is essentially the same size as Monte Vista Crossings' existing signs, and on par with other freeway signs.

The sign is 14 feet narrower than developers initially proposed on March 7 – a 38-foot wide sign, with 2,638 square-feet of advertising space for nine businesses. The approved design was the smallest of five options floated by developers, for a sign which they say has the potential to revitalize the neighboring commercial areas.

“This is part of a redevelopment of a larger area that we're trying to achieve here,” said Reed Onate, New Urban Communities Partners vice president.

The sign will replace an existing 10 foot by 15 foot pole sign for Days Inn, which does not meet Turlock's sign standards. The new sign will be funded by the Days Inn owners and NUCP, which hopes to use the sign to attract tenants to its under-development shopping center at 1300 W. Main St.

Onate said the larger panels, in addition to helping pay for the sign, would be more safely seen by highway drivers.

Highway 99 has a slight elevation change at that point, which could impact visibility, he said. And the shopping center will likely draw smaller brands with less-recognizable logos; a draft of the sign includes logos for Family Dollar and Mi Pueblo Food Center.

“If the intent is to bring someone off the freeway to go down to the new shopping center, then I think it should have a visual (impact),” said Planning Commissioner Elvis Dias.

But other Planning Commissioners disagreed, noting that the advertising panels would be larger on the West Main Street sign than on other existing highway signs, which pack more tenants into the same square footage.

“When I look at some of these other signs … I don't have issues discerning who the tenants are,” Planning Commissioner Soraya Fregosi said. “I do understand what you're saying however.”

A motion to approve the smaller sign initially failed, as half of the Planning Commission preferred a “Welcome to Turlock” text banner included in the initial, larger design. When the size of the sign shrunk, the “Welcome to” was removed for lack of space, leaving just “Turlock.”

A second attempt at the motion, adding in a request that developers add the “Welcome to” text if feasible, passed unanimously.

Adding the text will bring additional costs for NUCP, though they will reap fewer rewards from the sign than initially hoped for.

“It would be additional costs,” Onate said. “We're trying to recoup those costs through the rent of those spaces.”

Two of the larger advertising panels will likely feature Days Inn and Comfort Inn and Suites. The other four will be used to entice tenants to the 1300 W. Main St. development, or be rented to other nearby businesses.

The Planning Commission action will also allow the Days Inn to repair and resurface a small existing sign on West Main Street.

The sign, permitted in 1977, is located in an access easement, and the property owner has not responded to the City of Turlock after numerous attempts to discuss the sign. The repair and resurfacing can proceed without the property owner's approval, following a 15 notification period.

Should the sign not be repairable, Days Inn will install a new, 3-foot tall monument sign. That development would require express approval from the property owner.