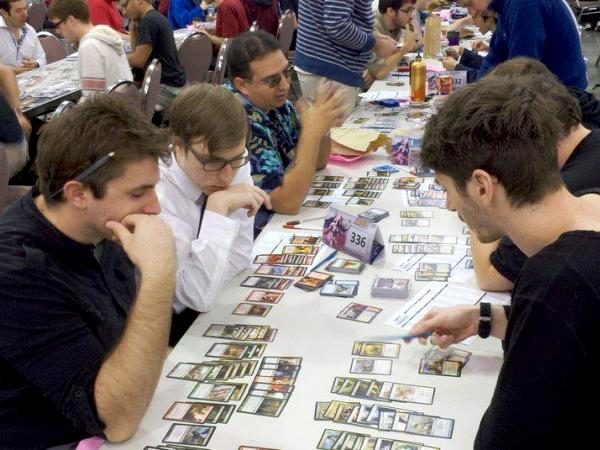 A California State University, Stanislaus graduate will represent America on a global stage, facing off against the best on the planet at one of the world's most popular card games.

Jason Gulevich, a 2012 CSU Stanislaus grad in Business Administration, will be one of four Americans competing as part of Team USA in the World Magic Cup – effectively the Olympics of the card game Magic: the Gathering.

“(It) feels like it isn’t real for the most part,” Gulevich said, still soaking in the news.

Magic: the Gathering is a card game, somewhat similar to poker. Both feature competitive pro tours, with some Magic players earning triple-digit salaries. More than 350,000 people played in Magic: the Gathering tournaments in 2011, and more than 12 million play the game.

But unlike poker, Magic: the Gathering challenges players to build their own decks, using specialized cards that represent magical warriors and powerful spells. In the game, players duel one-on-one to defeat their opponent by dealing damage with their cards.

But Gulevich had never won a major tournament before winning the WMCQ.

“The feeling of winning was surreal, I had tried so hard for now years to get a win at a large scale tournament, and now to achieve somewhat of that goal was awesome,” Gulevich said.

Gulevich piloted a deck known as “Naya Blitz” for the WMCQ, focused on overwhelming an opponent with hordes of small creatures and scoring an early victory. The strategy matched up with Gulevich's mindset at the time of the tournament.

“Part of me wanted to play it because it just felt like I could smash some face, which was kind of the mood I had been in for the past six months,” Gulevich said.

Six months before the tournament, Gulevich's soon-to-be fiancé left him without an explanation. He has yet to hear from her.

“I had just wanted to take out the frustration of going through that,” Gulevich said. “So this deck kind of gave me the chance to just take it out on people.”

Though Gulevich easily qualified for the tournament on several different measures, he almost opted not to play. The night before the World Magic Cup Qualifier Gulevich had an atrocious showing at a local tournament playing a different, more controlling deck.

“I ended up going 2-2 and was honestly thinking about not playing in the WMCQ at all,” Gulevich said.

But friend Nathan Ward and brother Aaron Gulevich convinced him to take a look at the Naya Blitz deck, describing it as “insane.” He gave the deck a quick whirl, and was instantly hooked.

Gulevich piloted the Naya Blitz deck to a 7-1-1 finish in the first nine rounds of the tournament, good to qualify for fourth seed in the top eight final bracket. That record didn't come without a little luck, he noted, especially in a tight round six match-up against Marina Kay Fagundes.

“In one of the games she had me dead on board … so my only play was mind-games,” Gulevich said.

Gulevich made a boldly aggressive play, tricking Fagundes into thinking she needed to play defense on her next turn. Had she attacked with everything, Fagundes would have won.

“Sometimes luck is just on your side,” Gulevich noted.

The quarterfinals and semifinals were uneventful, one-sided drubbings – by Gulevich's own account.
But the finals brought a stern challenge. Jacob Dobbs was piloting a “Red Deck Wins” deck, full of speedy creatures and fireballs to remove Gulevich's own creatures. Gulevich's deck had no such removal – it was all-in, all creatures.

“My finals match-up I was a little nervous,” Gulevich said. “… I heard a lot of people saying Red Deck Wins won the match-up, which I was not too happy about.”

Dobbs misplayed, however, acting as the aggressor throughout. Red Deck Wins can only defeat Naya Blitz by playing defense and winning a war of attrition.

“My opponent didn’t know he was the defensive deck in this match-up,” Gulevich said. “He tried to out-aggro me and I knew that was a game plan I could beat. No deck plays offense like Blitz.”

In the final game, Dobbs made an ill-planned attack, leaving him dead if Gulevich drew a “Hellrider” creature card.

“I remember thinking 'one time let this be the card I want,'” Gulevich said. “I drew just enough of my card to see that it was red and started with the letter 'H,' I did a quick smile to my teammates on my left, one of them shouted 'Hellride the whip,' and I flipped the card over to revel the Hellrider.”

With that, Dobbs extended his hand, Gulevich took the win, and Ward and Aaron Gulevich promptly tackled Jason Gulevich out of his chair.

Going to the World Magic Cup

This isn't the first time Gulevich will have the privilege of representing his country on a global stage. In his early 20s, Gulevich was part of Team USA in the sport of bowling – Gulevich has previously bowled a perfect 300 game.

“It is nice to once again to have the privilege to represent America,” Gulevich said.

The World Magic Cup will be held from August 2-4 in Amsterdam – a city which Gulevich has never visited. The tournament will be televised live via the internet.

Gulevich hopes to do well in the tournament – and avenge the tough loss an all-star American squad suffered a year ago. But mostly, Gulevich just wants to make his supporters proud.

“My personal goals are to do my best and I would love to be able to make it on the live (internet) stream so my friends and family can see me play,” Gulevich said. “Long as I don’t mess it up too bad that would be nice.”