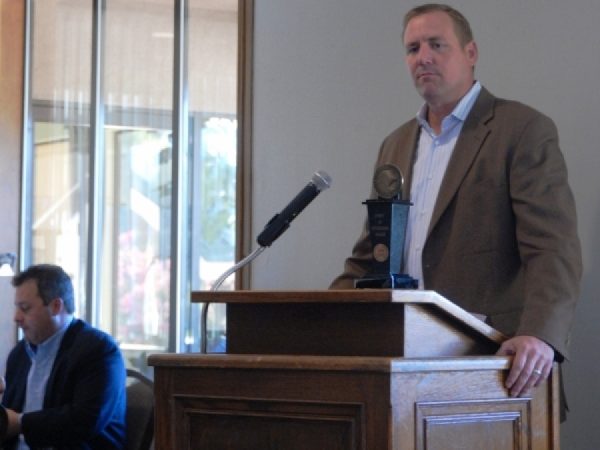 What politicians promise to do is often quite different from what they actually do upon arriving in the nation's capitol.

“In our work in Washington, we find keeping voting records is a good idea,” Castner said.

The U.S. Chamber tracks votes throughout the year, publishing an annual guide to voting records. From the hundreds of votes, a few key ones are selected. If legislators vote in favor of business on at least 70 percent of those votes, they earn the Spirit of Enterprise Award.

“We choose the tough ones,” Castner said.

This year, for the third consecutive year, U.S. Rep. Jeff Denham (R-Turlock) was honored with the Spirit of Enterprise Award. He was presented with the award Wednesday morning, during a Turlock Chamber of Commerce “Eggs and Issues Breakfast,” held at the Turlock Golf and Country Club.

Denham voted with business 11 of 12 times, supporting measures to increase domestic energy production, grant visas to highly skilled foreign workers, and to cut federal red tape. The tally was good enough for a 92 percent rating – well above the 70 percent needed for the Spirit of Enterprise Award.

“When I was in school, an A-minus was pretty good,” Denham said.

Denham sought to deflect any credit for the award, saying he simply voted in ways to benefit his constituents in the valley.

Denham went on to speak Wednesday about the many bills and programs he is supporting in Washington, ranging from initiatives to create jobs for veterans to selling off excess government properties, cutting corn subsidies in the farm bill to help local dairies, and the development of rail in Turlock. Denham said he supports the expansion of the Altimont Commuter Express train, but takes issue with the current plans for high-speed rail.

But the most important issue facing the U.S. Congress right now is immigration, Denham said.

“Next to water, I don't think there's anything more important to this county,” Denham said.

Denham has gone on record in support of a comprehensive, bipartisan immigration reform bill which he says is decades overdue. He supports a path to citizenship for current illegal residents, perhaps through required military service.

“We've got to bring people out of the shadows,” Denham said “… We've got to get an immigration bill done.”

And on top of all those challenges, the federal budget still looms, where Denham hopes to reduce debt, reform medicare, and plan for social security's future.

“It's a time to pay attention to what's happening in D.C.,” Denham said.