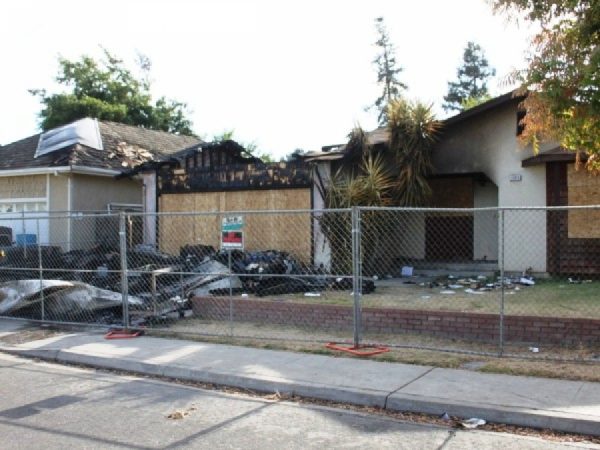 A family of three was displaced from a Turlock home last Friday evening, after a fire broke out in the garage of their 1265 Glasgow St. residence.

At approximately 4:50 p.m. last Friday, the Turlock Fire Department responded to a 911 call reporting the garage fire. Upon arrival, TFD crews encountered heavy fire conditions within the garage that had extended to the primary residence. Two parked vehicles in the driveway had also caught fire, and the neighbor’s roof was ignited as well.

According to TFD, crews made a quick and hard attack on the fire and were able to contain the fire to the primary residence and burnt vehicles, while preserving the neighbor’s residence with minimal damage.

Although it was initially reported that persons were still in the residence upon the arrival of fire crews, the entire family was found safely outside of the burning structure.

While the fire was brought under control in 30 minutes after crews arrived, the last fire crews did not clear the scene until 11:30 p.m.

The fire appears to have started in the interior of the garage, with the cause of the fire ruled to be undermined after an extensive investigation.

The primary residence suffered heavy fire damage, including: a fully collapsed garage roof, fire damage to the adjoining kitchen, and heavy smoke damage throughout the interior of the living area. The two parked vehicles also suffered heavy fire damage, while the neighboring home was subject to damage to the exterior windows and burnt portions of the wood shake roof closest to the primary home. The total estimated loss is $145,000. The owner of the neighboring house has stated that they would find a roofer immediately to fix the damage done by the fire and hopes their insurance will cover the cost.

According to TFD, two adults and one child were displaced due to the fire and were given assistance by the Red Cross for clothing, food and shelter.