Rim Fire No Threat to TID 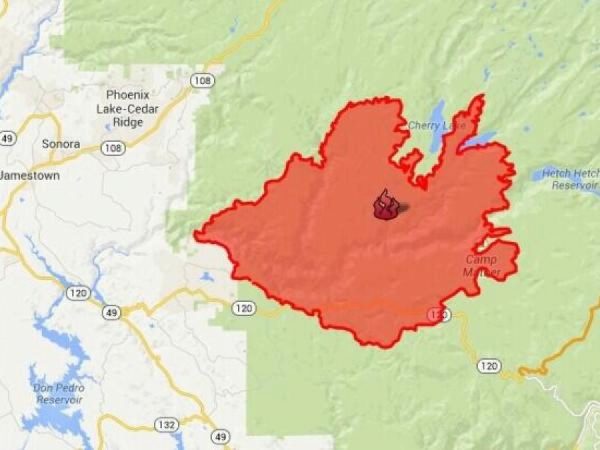 Though the Rim Fire has impacted operations for some reservoirs on the Tuolumne River, the Turlock Irrigation District expects to escape the massive blaze unscathed.

“The Rim Fire has not adversely affected TID's water or power operations, nor do we expect it to, given what is known at this time,” said TID spokesperson Herb Smart.

The Rim Fire has burned 149,790 acres in the Stanislaus National Forest along Highway 120, near Yosemite National Park. The fire – now the 13th largest in state history – is only 15 percent contained.

The fire is currently 10 to 15 miles northeast of Don Pedro Reservoir, located in La Grange. Don Pedro is co-owned by the Turlock and Modesto Irrigation Districts, and is the source of both irrigation water and a large portion of the districts' electrical power.

In addition to burning homes and forcing the evacuation of small towns, the Rim Fire also led Gov. Jerry Brown (D) to declare a state of emergency for San Francisco – a city 150 miles away from the fire.

But San Francisco relies on the Hetch Hetchy Reservoir, located in Yosemite National Park, for 85 percent of its drinking water and some power generation. The fire forced operators to shut down hydroelectric generators, stop using nearby transmission lines to ferry energy to San Francisco, and filled Hetch Hetchy's water with ash, impacting drinkability.

Hetch Hetchy is upstream of Don Pedro; both are part of the Tuolumne River system. The ashy water upstream is not expected to impact TID operations.

“Any ash in the river will dilute by the time it reaches Don Pedro, and will not present water quality issues,” Smart said.

Though the Rim Fire currently poses no threat to TID, district officials will keep a close eye on the blaze, Smart said.

“The district will continue to monitor the fire and the happenings upstream of the reservoir,” Smart said.