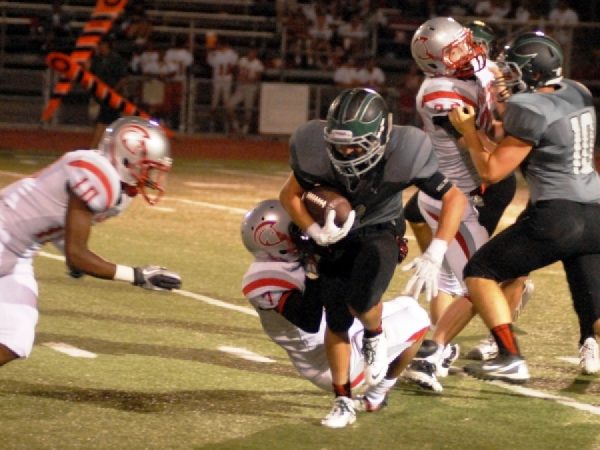 With less than 1:30 left in the game and the score tied at 36-all, time was running out for the Pitman Pride against the Lincoln (Stockton) Trojans.

But then Pitman put the ball in speedster Drew Lewis's hands, calling a simple sweep around the left side.

“I was just trying to pump my legs and make the corner,” Lewis said.

And once he hit that corner, he was gone. In a single play and just a few seconds, Lewis covered 52 yards to reach the end zone – and secure a 43-36 Pride victory.

At first, it looked like the game might be easy. The Pride took the lead on just the third play of the game, with a 69-yard Lewis dash around the left side, converting a third-amd-six and making the Trojans look like they were standing still.

Pitman added two points with a safety, following a tremendous special teams play to trap Lincoln at their own 1-yard line following a punt.

And Pitman senior halfback Logan Wolfley tacked on another touchdown with a spectacular 28-yard run to the right side, cutting back to make one defender miss and hurdling another to reach the endzone. In less than eight minutes of play, the Pride led 16-0.

But then Lincoln started to wake up, with senior quarterback Ravon Alexander completing a 35-yard touchdown pass to senior wide-out Devon Pet, who crossed underneath the Pride coverage and waltzed into the end zone.

Donovan Bravo, junior kicker for the pride, drove a 27-yard field goal through the uprights to close out an action packed first-quarter with the Pride leading 19-7.

The Trojans scored on the very first drive of the second quarter, though, with their workhorse senior running back Jamill Thomas entering the end zone untouched from two yards out. The ensuing PAT was blocked by Pitman senior defensive back Chance Hagar, following a bad snap.

Bravo nailed another field goal attempt, a 37-yarder, putting the score at 22-13. Both teams swapped possession several times as the half expired, with a Lincoln fumble and an interception thrown by Pitman senior QB Wyatt Clapper.

That interception started a rough streak for Clapper that stopped the Pitman offense in its tracks. The pass kicked off an 0/7 passing stretch, with three interceptions.

Lincoln took advantage of Pitman's sputtering offense in the third quarter, with Thomas scoring on another untouched two-yard TD run to narrow the Pride's lead to just two points – a 22-20 game.

And then a wild-and-crazy 37-point fourth quarter broke out.

Lincoln took its first lead of the game, 28-22, with 11:24 left in the ballgame. Alexander appeared to be bottled up in the backfield on a third-and-13 from the Pitman 35, but bought enough time to find senior WR Stephan Robinson in the end zone. The Trojans then completed a two-point conversion on a sweep from junior WR Mark Russell.

Weary of Clapper's passing, the Pride called nine straight rushing plays on their next drive, moving the ball from their 21 to the Lincoln 39. But facing a fourth-and-five, the Pride called a timeout to discuss their options – and call a play that put the game in Clapper's hands.

“I had to flush it mentally from myself,” Clapper said. “I just went on the sideline, gathered myself, and came back.”

Clapper said he told his offensive linemen it was up to them to win the game. He knew the aggressive Trojans squad was wearing down the Pitman defense, and that the Pride's offense would need to awaken to secure a victory.

Clapper took the field following the timeout, staring down the fourth-and-five, and completed a 17-yard pass to senior tight end Justin Van Fleet. On the next play, Clapper again passed – this time finding Lewis open in the endzone. Following the PAT, Pitman held just a one-point lead.

Yet Pitman seemed in control, despite the narrow margin. And on their next drive, the Pride would extend their lead to eight on a Mario Lewis one-yard touchdown run.

But Lincoln responded once again, driving 78 yards in less than two minutes to score on a 34-yard completion from Alexander to Robinson. And again the Trojans converted a two-point attempt – this one on a Thomas run up the middle – knotting the score at 36-all with just 3:32 to play.

The Pride were determined to win, though, securing the victory with a 71-yard drive in less than two minutes, capped by Drew Lewis's 52-yard touchdown run. The Trojans fumbled when returning the ensuing kickoff, sealing the back-and-forth game.

“We had to beat a great Lincoln team to win this game,” Drew Lewis said. “It was a slug fest.”