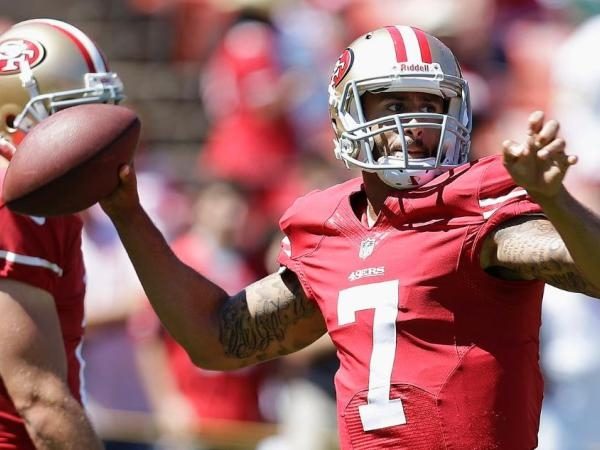 In the weeks leading up to the San Francisco 49ers' first regular season game, the Green Bay Packers made one thing clear: They would not let Colin Kaepernick run.

But what happens when you take away the run from the 49ers starting quarterback? Oh, he only sets a personal best in passing, throwing for a mammoth 412 yards on 27 of 39 passing and leading the 49ers to a 34-28 win over Green Bay.

The Pitman High School graduate hadn't thrown for 400-plus yards since his freshman year at University of Nevada, Reno, in a matchup against Louisiana Tech.

The outstanding performance against one of the league's best defenses set the San Francisco franchise record for most passing yards in a season opener. The total marked the 11th-most passing yards for a 49ers quarterback in any game, putting Kaepernick in the same class as legends like Joe Montana and Steve Young.

Despite the success, Kaepernick still felt like he should have done better.

“I feel like there were more throws that I should have made out there,” Kaepernick said. “There were plenty of times I feel like I should have completed passes that I didn't. That's something I have to get better at.”

A massive 208 of those passing yards went to Kaepernick's new favorite weapon: former Baltimore Ravens wide-out Anquan Boldin. The Ravens, thinking the 32-year-old veteran over the hill, traded him to the 49ers for just a sixth-round draft pick during the offseason.

It wasn't all good news for Kaepernick, though, who was targeted by Packers linebacker Clay Matthews.

On a third-and-6 play from the Packers' 10, Kap stepped out-of-bounds shy of a first down at the 6. Matthews then pulled Kaepernick down violently, after the play had ended.

The late hit caused a fracas on the sidelines, resulting in offsetting penalties against Matthews and 49ers tackle Joe Staley, who stepped in to defend his quarterback. The 49ers were – erroneously – given a second chance at third-and-6, which Kap converted into a touchdown on a pass to Boldin.

“That's free yards for us, free play,” Kaepernick said. “.. It helped our offense out, it doesn't bother me.”

Kaepernick's attitude sends a message to opposing teams: Taking cheap shots at the 49ers quarterback isn't going to slow him down.

“If intimidation is your game plan, I hope you have a better one,” Kaepernick said.