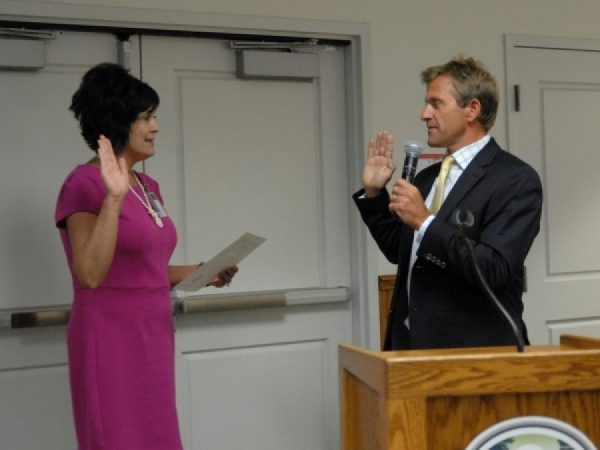 Turlock officially welcomed a new member to its executive team Tuesday, swearing in Michael Cooke as as the city's new Municipal Services Director.

“We're fortunate to have someone of this caliber,” City Manager Roy Wasden said. “… I don't think we could find a finer director for our Municipal Services than Michael Cooke.”

Turlock decided to hire from within to replace Madden, creating a Deputy Director of Municipal Services position in January to prepare. Cooke was named to the position, and spent the last eight months training specifically for his new post.

Cooke previously served as Turlock's Regulatory Affairs Manager. He has worked for the City of Turlock since 1992.

Cooke is originally from the United Kingdom, where he met his wife, Monica, who is from Hickman. The two moved to Turlock after marrying in 1992, with Cooke having just $200 to his name and a small bag of possessions. He became a U.S. Citizen in 2005.

Cooke thanked Wasden for the faith Turlock has shown in him, Madden for his mentorship, and the men and women of Municipal Services for their hard work.

“I promise you I will do my best day-in and day-out to continue the tradition of a fine department I've inherited,” Cooke said.

Cooke was honored with a special reception, held prior to the start of the regular meeting of the Turlock City Council.

On Tuesday, the Turlock City Council also:
• Approved the installation of a traffic signal at the intersection of Golden State Boulevard and Del's Lane. The work will improve pavement, install crosswalks, and add pedestrian curb ramps.
Work will be performed by George Reed Inc., of Modesto, at a cost of $368,324. A federal grant will offset a portion of the costs.
• Was updated on the City of Turlock's tow truck operators. All operators are in compliance with city regulations, including Anderson's Towing which was previously guilty of towing Turlockers' cars to a lot in another town.
• Affirmed City Manager Roy Wasden's decision to send a letter in opposition of Senate Bill 594, which would have barred local governmental organizations from taking positions on ballot measures which affect their members.
• Appointed 23 members to the Turlock Mayor's Economic Development Task Force. The appointments were to occur at the last council meeting, but were delayed.
• Proclaimed Sept. 19 “Drive 4 Pledges Day,” a movement to end texting while driving supported by AT&T.
• Canceled the Turlock City Council meeting scheduled for Nov. 26.
• In closed session, conferenced with real property negotiators regarding the purchase of property at 1525 Dianne Dr., and labor negotiators from all employee unions.