Turlocker Seventh After Second Leg of “The Amazing Race” 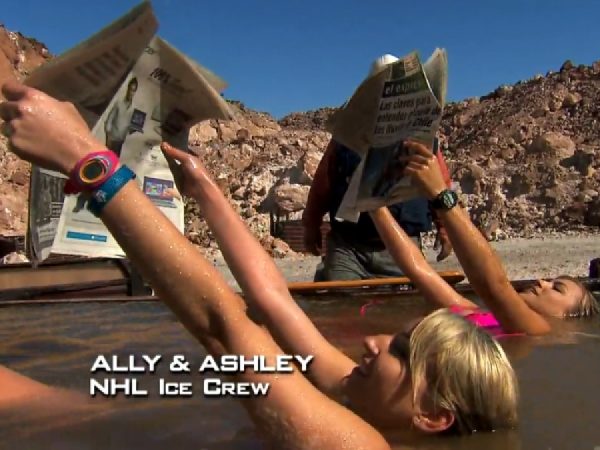 Allison “Ally” Mello, 23, a Pitman High School graduate, staved off elimination – and made an alliance – on the second episode of the award-winning program “The Amazing Race.”

Mello and her partner, Ashley Covert, 25, both members of the Ice Crew for the National Hockey League's Los Angeles Kings, joined forces with “The Afghanimals,” cousins Leo Temory and Jamal Zadran. The Afghanimals call Mello and Covert their “race wives,” because their alliance is more of a commitment than race girlfriends would entail.

Mello and Covert departed from Iquique, Chile in sixth place, tasked with finding an old military sailing ship in the middle of the night. But the ship did not open to tourists until morning, allowing all teams to catch up.

Once boarding the ship, teams found a clue asking them to find the phrase said by the captain, Arturo Prat, before the ship was sunk. Mello and Covert were the second team to find the phrase, “Al abordaje, muchachos,” thanks to a helpful native.

Teams then raced by taxi to the Irlanda Salt Mines, where they biked across a salt flat before facing a detour – a choice between two tasks. After Mello admitted that her team was “not the best bike riders,” they set off into the salt flats. The third-place Afghanimals quickly caught up during the ride.

“Yes, our husbands! We missed you,” Mello said, as the Afghanimals approached.

Teams were asked to either break open salt boulders, or pour enough salt into a vat of water to float and read the day's newspaper. Mello and Covert started off mining, but decided to switch to the floating task when mining took too much strength. That task, too, turned out to require strength, as teams carried 60-pound bags of salt to the vats of water.

“It's really stinking heavy. Especially when you're walking on rocks,” Mello said.

The switch put Mello and Covert behind; they entered the detour in second place, but left in seventh.

Teams then traveled back to Iquique, where they had to take a 24-hour, 1,000-mile bus ride to Santiago, Chile. Mello and Covert and four other teams got on the second-fastest bus, leaving a half-hour after the first five teams. The last team was on a third bus, a half-hour behind.

Once arriving in Santiago, teams had to locate the Plaza de Armas. There, a roadblock, a task only one team member was perform, was taken on by Covert. Covert took over a shoeshine station, shined customers shoes, and was the first person from the second bus to pack up the mobile shoeshine stand correctly, finishing the detour in sixth. But the duo were slow to find a taxi, leaving in seventh.

After the detour, teams raced to the leg's finish at the Cascada de las Animas nature reserve in the Andes mountains. Mello and Covert finished the leg in seventh, one spot worse than they started.

The last place team, actors Rowan Joseph and Shane Partlow, were eliminated when they arrived tenth, after a number of errors throughout the leg.

The Amazing Race will next air at 7 p.m. Sunday on CBS.