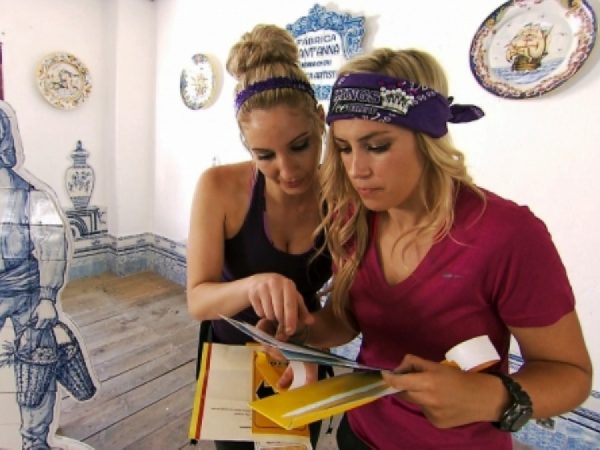 The alliance between the “Ice Queens” and the “Afghanimals” remained strong on the third leg of the Amazing Race, as Allison “Ally” Mello, 23, a Pitman High School graduate, avoided elimination while visiting her family's homeland.

Mello and her partner, Ashley Covert, 25, both members of the Ice Crew for the National Hockey League's Los Angeles Kings, set off from Chile and left for Lisbon, Portugal this week.

“I've never been there, it's my dream come true,” Mello said, noting her grandfather was from Portugal. “I'm so excited to go to Portugal!”

Worries about finding plane tickets were quickly allayed when Mello and Covert met up with their “race husbands,” the allied team of Leo Temory and Jamal Zadran, the Afghanimals. Temory and Zadran had already secured flights, and shared their route with the Ice Queens.

But the Afghanimals led Mello and Covert astray, on a slow flight connecting through London. Even worse, only the Afghanimals and the Ice Queens were on the flight, potentially putting one of the alliance members at risk of elimination.

“We're taking a risk. This is where the race starts,” Covert said.

Mello and Covert and the Afghanimals arrived in Lisbon as teams six and seven, out of nine teams left in the race. Ex-NFL players Chester Pitts and Ephraim Salaam, who were ultimately eliminated, were still hours behind after missing two different flights due to mechanical issues.

Once landing, teams headed to Martim Moniz square where they rode a tram to the top of a hill. There, they found a painting of a horse-drawn carriage, leading them to Portugal's National Coach Museum.

Inside the museum teams faced a detour – a choice between two tasks. In this case, teams opted between Tiles – assembling a life-size puzzle from tiles – or “Miles” – measuring the distance Magellan traveled using a large map and a giant navigation tool.

Both the Afghanimals and the Ice Queens decided that Miles seemed like the easier choice. But neither Mello and Covert or the Afghanimals realized that the world is, indeed, round, and that one side of the map connects to the other. The gaffe lead to an erroneous measurement, delaying the teams and eventually convincing both teams to switch tasks.

The teams breezed through Tiles, but the lost time from switching allowed the eighth place team to catch up.

Once completing their puzzle, the teams traveled to Clube Portugues De Tiro a Chumbo where they faced a roadblock – a task only one team member must perform. This roadblock tasked a team member with dressing as a knight, then firing a ballista to hit a target 150 feet away.

Mello decided to do the roadblock, noting her Portuguese grandfather had taught her how to shoot a bow and arrow.

“Dude, I have to make my grandpa proud!” Mello said. “If I suck at this he is going to be so mad.”

After nailing the ballista shot, Mello and Covert traveled to Castelo dos Mouros, a ninth-century castle that served as the pit stop and end of this week's leg of “The Amazing Race.” Mello and Covert arrived in seventh, just behind the Afghanimals, allowing them to advance.