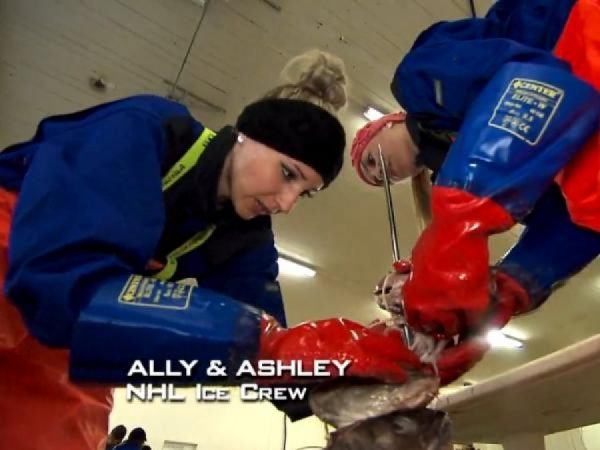 Allison “Ally” Mello, 23, a Pitman High School graduate, and her partner Ashley Covert, 25, continued from Portugal to Norway in Sunday night’s episode of “The Amazing Race.”

Even though the teammates are members of the Ice Crew for the National Hockey League's Los Angeles Kings, the freezing temperatures forced them to bundle up.

When the “Ice Queens” arrived in Norway they were met with a detour challenge in which they had to tie six strands of 10 fish heads together on a string.

“If Kings fans don’t think we are strong after this, then I don’t know what we have to do to prove Kings girls are kind of badass,” said Covert as Mello plunged fish heads onto metal rods.

After tying the fish heads together, the girls had to carry the fish a significant distance in a wheelbarrow and then hang them on wooden racks.

“I have a new appreciation for people who are fisherman,” said Mello.

Following the detour the partners were met with a roadblock challenge, where one team member had to swing off a bridge on an 80-foot rope, then plunge into the icy waters below to obtain their next clue.

Covert volunteered for the swing and braved the plunge into bone-chilling water.

“It’s a weird feeling know that your friend is about to jump off a bridge,” said Mello.

Next, the pair was met with the challenge of hooking up a boulder to the back of a truck. Another race clue was hidden underneath the boulder.

Upon arrival the girls realized they didn’t know how to put the stick-shift Ford Ranger in reverse gear. Fortunately the “Oklahoma Boys,” Tim and Danny, gave them a hand and helped them set up the truck so the girls could hook up the chains and pull the boulder.

When the show ended Mello and Covert were in seventh place of eight teams left in the race. But the episode ended on a cliffhanger, with teams told to keep racing in a double-length race leg; it remains to be seen where Mello and Covert will finish the leg.