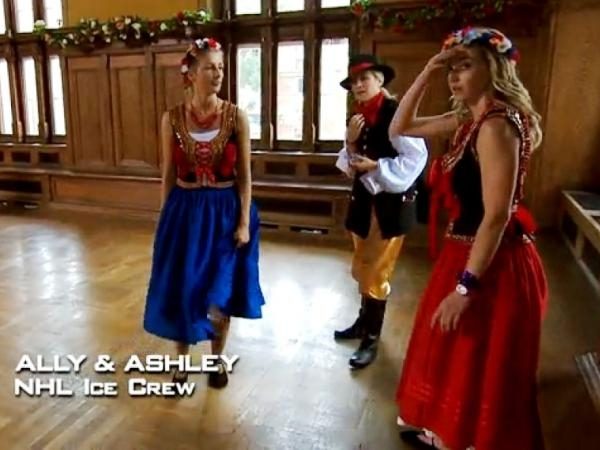 Following a fishy experience and an Arctic plunge in Norway, Allison “Ally” Mello, 23, a Pitman High School graduate, and her partner Ashley Covert, 25, continued to Gdansk, Poland in the second stanza of a two-part episode of of the CBS program “The Amazing Race.”

As this week’s episode began, Mello and Covert, both members of the Ice Crew for the NHL's Los Angeles Kings, were in seventh place. Following a 34-hour boat ride and flight to Poland, the pair had difficulty locating the first clue of the episode – to find the Gdansk Shipyard. As their taxi driver wandered about the shipyard area, Mello expressed her frustration, “Why are we so lost?” she said.

Eventually the Ice Queens found their clue and raced to the Golden Gate, an entrance to downtown Gdansk, for their next detour challenge: “Pose or Polka.” They decided to polka and they had to learn the traditional Polish dance to earn the approval of a dance instructor – and their next clue.

Unlike most teams, the Los Angeles Kings Ice Crew members found the polka suitable to them and gained their clue after just a single attempt at the polka, gaining a spot and leaving the detour in sixth place.

While racing to their next destination, the Medieval Harbor Crane in Gdansk, the Ice Queens narrowly avoided a U-Turn which forced their allies, the “Afghanimals” Leo Temory and Jamal Zadran, and the beardy team of Brandon Squyres and Adam Switzer to complete the “Pose” portion of the detour before proceeding.

As the Afghanimals and the Beards U-Turned, the Ice Queens proceeded to their next challenge: “Who’s got a sweet tooth?” Teams had to race to Poland’s half-mile long apartment building and eat a “rose” flavored pastry, similar to a jelly-filled doughnut. The catch was the teams had to find the rose doughnut from a list of 10 apartments in the mammoth structure. Each apartment had a plate of vanilla cream donuts, except the specific apartment with the rose-flavored one.

The Ice Queens quickly determined that Covert had a sweet tooth and she set off to find the rose doughnut.

“You got this Ash,” Mello yelled. “Go eat those doughnuts!”

Though Covert completed the task quickly, the Afghanimals caught up with the Ice Queens and worked together to complete the roadblock.

The girls then raced to the finish line, the longest wooden pier in Europe. Mello and Covert finished just behind the Afghanimals in seventh and next to last- a spot held by the Beards, who were eliminated.

Next week the girls will race to Vienna to sing with the Vienna Boys Choir.