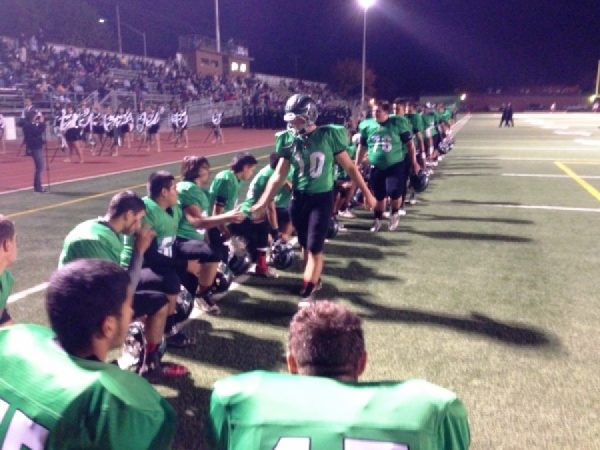 Up until the final minutes of Pitman High School's 42-12 drubbing of Golden Valley High, the only notable point was how thoroughly the Pride dismantled the Cougars at Joe Debely Stadium in Turlock.

But then, one of the great feel-good moments of the season occurred.

With Pitman (6-3, 2-2 CCC) firmly in control of the game and a running clock for the entire second half, Cougars (3-6, 1-3 CCC) head coach Dennis Stubbs approached Tyler as time was running down. There was a “special” player that Stubbs wanted to get in to the game.

So Tyler asked his Pride defenders to play the kid hard, but fair. And so they did, allowing a ten-yard run before tackling – but not leveling – the player at the end of the play.

But then Tyler saw the crowd react, and knew the kid deserved another chance.

So as time was running out, the special player got a second chance – and rushed in for a touchdown from the 16 yard line. The play drew uproarious cheers and applause from both sidelines.

The game itself was largely forgettable, if only because Pitman so thoroughly outclassed Golden Valley. The Pitman starting defense allowed only two Cougar first downs – on the first drive of the game – and forced five subsequent three-and-outs.

“I was real pleased with the way we played defense,” Tyler said.

Senior halfback Logan Wolfley got the scoring started with a 23-yard pass reception from senior QB Wyatt Clapper. And then Wolfley kept it going, with a 12-yard rush. And he wasn't done with that – Wolfley would score the next touchdown as well, on a tricky three-yard sweep to the right.

Clapper then completed a 16-yard touchdown pass to senior wide receiver Chance Hagar, as he cut across the middle of the field. And the defense got in on the scoring too, with senior defensive back D'Andre Griffen jumping the route on a hitch and returning a pick-six for 20 yards. That play gave Pitman a 35-0 lead at the half.

The Pride would lengthen their lead on the second play of third quarter, as senior halfback Drew Lewis bounced a simple run outside to cover 51 yards and give Pitman a 42-0 lead. After that play, Golden Valley asked for a running clock and Pitman pulled their starting players.

“Every part of the game, I was real proud of,” Tyler said.

The Cougar's two scores came on the feel-good run to end the game, and a third-down rush from the one yard line, after the Pride's second-string defense nearly made a goal-line stand.

The only negative came for the Pride on the very first offensive play of the game, when star senior fullback Mario Lewis injured his right knee. Tyler was unsure how serious the injury is, but said Lewis may well be out for next week's game.

Unfortunately for the Pride, next week's game is the season's biggest: the annual Harvest Bowl against the Turlock High School Bulldogs (5-4, 1-3 CCC). The Pride, who have won three of the last four Harvest Bowls, will approach the contest the same as any other game, Tyler said, while the Bulldogs have to win to have any chance of making the playoffs.

“It's just a football game we need to win,” Tyler said.