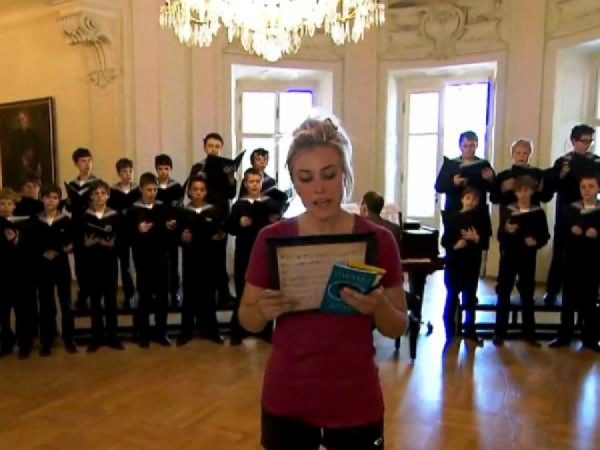 In a continuing pattern Mello and Covert, dubbed the “Ice Queens” because they are members of the National Hockey League’s Los Angeles Kings ice crew, found themselves one step removed from the cellar. With a sixth place finish out of seven teams, the Ice Queens will race for another week.

This week’s episode began with teams traveling from Gdansk, Poland to Vienna, Austria. The Ice Queens were the last team to depart Poland by rail, but retained high hopes of capturing the $1 million prize for first place overall.

“We hope we can make it to the end and surprise the heck out of everyone,” proclaimed Mello.

In Vienna all seven teams arrived around the same time, and were met with a decision between a detour challenge and a fast forward challenge. The Ice Queens chose the detour, “masquerade” in which they had to wear elaborately painted masks and then find the pair of matching masks on a dancing couple. Fortunately, they were able to find the matching masks quickly and were the fourth team to move on to the next task.

The next roadblock challenge was titled “Choir Boy at Heart.” Teams had to sing “Die Forelle,” in German, with the world-famous Vienna Boys' Choir. Mello chose to be the “choir boy at heart.”

“I love performing but I’m actually really bad at trying to speak other languages,” said Mello.

Mello's statement proved to be true after she struggled to earn the choir director’s approval. In fact, Mello failed four times before gaining the next clue in the race.

Finally, on her fifth try, Mello won the director's approval, who called her singing performance “acceptable.” The Ice Queens moved on to the Schonbrunn Palace pit stop and a lengthy garden maze.

With the Oklahoma Boys Tim Wiyninger and Danny Merkey nipping at their heels – or skates – the Ice Queens quickly navigated through the maze and to the finish line, where they remained alive for another week. The Oklahoma Boys finished last, and were eliminated.

Next week the “The Amazing Race” continues to Abu Dhabi for cart racing.