Turlockers Line Up for PlayStation 4 Launch 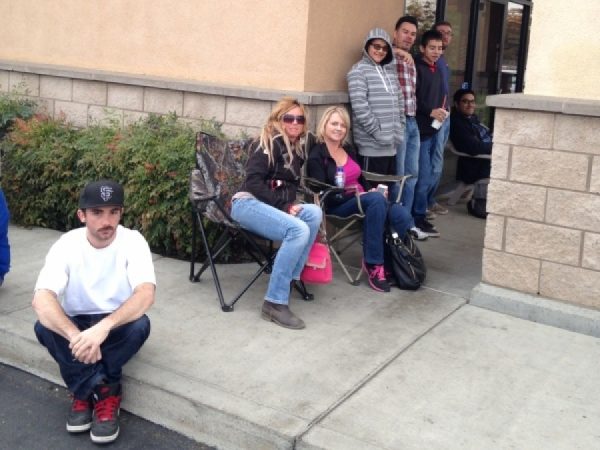 The next generation of gaming arrived today, and scores of Turlockers were in line to experience it. There were lines and lawn chairs outside of the Geer Road and Countryside Drive GameStops as early as 2 p.m. on Thursday, all waiting for the same thing.

The Sony PlayStation4 (PS4) is part of the eighth generation of game consoles and was just released today at 12 midnight. The PS4 packs a number of improvements to the PlayStation 3, with a faster processor and a newly-designed controller with a touch pad.

“I got to try out the PS4 at Blizzcon (a convention hosted by video game developer Blizzard Entertainment) in Anaheim this November,” said Deanna Barnes as she stood in line. “I tried the game 'Diablo 3' which is coming out for the PS4. The graphics were pretty killer, but their controller is the best part. When you’re holding it, it kind of disappears as you play. It’s a really comfortable hold, it’s all intuitive. It’s a much better model than the PS3 just because of how it rests in your hands and how easy it is to reach everything.”

Barnes certainly wasn’t the only one eager for the PS4 release. Even at 7:30 p.m., two lines branched out from the door of the Countryside Drive GameStop – one for those who had pre-ordered the console and the other for those who hoped to buy one on the spot.

Sukhman Bassi was one of those hopefuls. He was sitting first in line in a white lawn chair and claimed to have arrived at 2:20 p.m. that afternoon. He said that, more than anything, he was most excited about the new games coming out, citing the futuristic first-person shooter “Killzone: Shadow Fall” as a particular want.

“I just thought I’d come here early because certain stores have more stock,” Bassi explained.
He went on to say that GameStop would order a set amount for people who ordered the console, and carry a few extra for those that showed up on the day of the release to purchase it.

On the opposite side of the line, waiting at the very end, was Scott Christensen. He stated that the graphics, audio and accompanying games were what caught his interest. Christensen had only been waiting half an hour, and was at least the thirtieth in line because of it.

One PS4 fan, Michael Nissan,said that the Countryside Drive GameStop received only 20 spare PS4s. It’s due to these odds that Nissan found himself getting in line at 2:45 p.m. for the 12 midnight launch.

A veteran of midnight releases, Nissan has waited for a number of games, including each of the “Call of Duty” games since “Modern Warfare,” “Battlefield,” “FIFA,” and last years’ “Assassin’s Creed.” Fortunately for Nissan, he was seventh in line.

He was also eager to share his excitement about various aspects of the console: the price difference – $100 cheaper than Microsoft's Xbox One, which launches next week – the controller featuring a touch pad, and the fact that it was a new generation console with a 500 GB hard drive.

“All my other buddies play it, too,” Nissan added with a laugh.

The line at the Geer Store was notably shorter, with six or so people waiting in line and all of them standing inside.

Samantha Williams was one of those people, and had only been waiting for about 20 minutes to purchase her PS4 – even though she hadn’t pre-ordered. She laughed upon hearing that the Countryside Drive store had a line at least 30 people long, and admitted she didn’t even want to try going over there for the console.

Williams also shared a number of facets of the console that she was excited for.

“There’s a lot of exclusives for the PS4, and I don’t really like Halo (Microsoft's marquee first-person shooter franchise) so I’m not getting an Xbox,” said Williams. “And I’ve looked up all the statistics for the PS4 and a lot of the stuff in it is better, like it has a better processor to process the game better and faster.”

Although GameStop has admitted that they have no information as to when the console will be restocked, they did mention that they had a 48-hour hold on all pre-orders. This means that those who pre-ordered and did not pick up their PS4 would have their claim removed from the console at that time.

GameStop mentioned that there was a good likelihood that not all the PS4s would be picked up. The 48-hour hold ends this Sunday, so those who are still trying to obtain a console have one more window in which to purchase it before the PS4 is officially restocked.