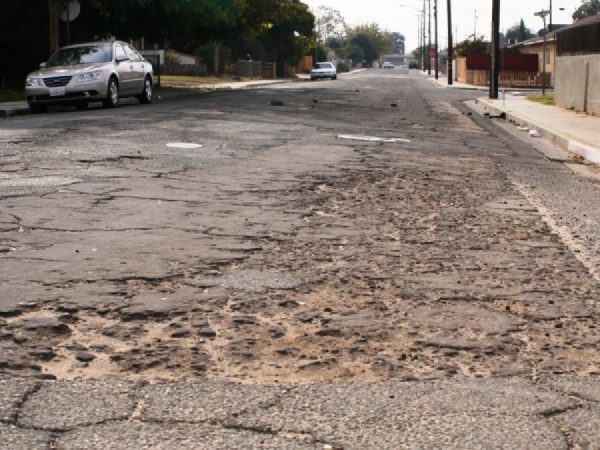 A new report on the state of Turlock's roadways paints a grim, cracked picture, with the city claiming quantifiably poor streets that are only set to get worse.

The report was drafted by Margot Yapp, P.E., Vice President of Nichols Consulting Engineers, a firm which specializes in pavement engineering.

“If you drive around Turlock, I'm sure you're going to recognize some of these,” Yapp said, pointing to photos of cracked, tattered roads.

The report comes as the Stanislaus County Council of Governments, the regional transportation planning organization, hired Nichols Consulting Engineers to review the state of all federally-funded roadways in the county. The City of Turlock agreed to spend an extra $28,000 from its own coffers to have Nichols Consulting Engineers study all 251 miles of Turlock streets, valued at $357 million.

That study didn't turn up good news, though. Almost a quarter of Turlock's roads are considered to be in “poor” or “failed” condition – below a 50 on the 100 point Pavement Condition Index scale.

“There are some significant red flags here that have some consequences for the future,” Yapp said.

Making matters worse, Turlock has the second worst streets in Stanislaus County, claiming an average score of 67 on the PCI. Only Modesto has worse streets, at a 63.

There's a reason why Turlock's streets are considered “at risk.” If Turlock doesn't start spending more on road repair soon, the costs to repair and maintain its streets will skyrocket.

“It's kind of the edge of a very steep cliff,” Yapp said. “That's where Turlock is today.”

Because of that, Yapp said that it makes more fiscal sense to prioritize the maintenance of roads that are in good shape. Otherwise, the costs of maintaining those roads quickly escalates.

However, Turlock isn't spending enough to even maintain the good roads. If the City of Turlock continued at its current roadwork spending level – about $1.25 million per year – the city's PCI would drop to 33 in 20 years. That would leave Turlock with $377 million in backlogged work.

“It's essentially saying we need to replace every road in town in 20 years,” Yapp said.

If Turlock moved forward with a half-cent sales tax dedicated to roads, frequently discussed by local leaders, the bleeding could be stemmed.

Such a sales tax would raise about $5 million per year – enough to keep Turlock's PCI roughly flat for the next 20 years, but not make any improvements. And Turlock would still face about $156 million in deferred repairs, despite the increased spending.

To improve Turlock's streets to a PCI of 80 – the good range – the city would need to invest $11.4 million per year for the next 20 years. That's roughly equivalent to the proceeds of a one-cent sales tax, double what has been previously discussed.

“This is definitely, I think, very difficult to achieve,” Yapp said.

Regardless of the obstacles, the time to act is now, Yapp said. Otherwise, Turlock could face a road repair bill that it has no chance of paying.

“This is the time we could do something before it drops off that steep cliff,” Yapp said.