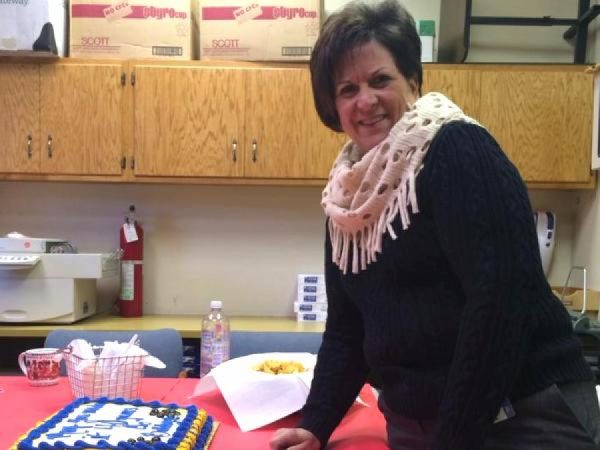 Perhaps there is no one on the planet who bleeds more Turlock High School Blue and Gold than Principal's Administrative Assistant Mary Venema.

For most people 40 years is a long time to work at one place, but not for Venema, 61.

“There hasn’t been a day yet where I didn’t want to come to work, I’ve been so fortunate to work with so many great people and administrators over the years,” she said.

Although her official anniversary isn’t until next week, Venema's co-workers threw her an impromptu celebration Wednesday after overhearing her mention the upcoming anniversary to a school vendor.

Since 1972 Venema says she has had many career highlights, but mostly she remembers many of the committees and THS traditions she helped launch. She organized the Election Convention tradition in 1990, where students elect student body representatives in a fashion similar to the Republican or Democratic National Conventions, and the first Registration Round-Up, held in 1993.

In 1992 she helped re-structure the THS commencement ceremony to its current, much-lauded formal ceremony.

She has served on numerous committees, including the Pitman Committee where she helped pick the school colors and mascot with then-THS Principal and current PHS Principal Rod Hollars. She also served on the Centennial Committee for the 100-year anniversary of THS.

“To say Mary is an exemplary employee would be an understatement; she is quite simply an invaluable and virtually irreplaceable asset to our staff and school,” said current THS Principal Marie Peterson. “ After 40 years working at THS, Mary plans to retire within the next two years. When her retirement is official, a chapter in THS history will close, but a new one will begin for Mary with more time for traveling, family, and attending baseball games of her beloved S.F. Giants. We wish her the very best in her life after THS.”

About 16 years ago Venema became the Principal’s Secretary and has remained in that position ever since – and she has earned high praise working for Bob Stammerjohan, Ed Felt, Rod Hollars, Dana Salles Trevethan, and Peterson.

“Mary continues to demonstrate the utmost professionalism in her abilities to manage, communicate, and guide all stakeholders to what is in the absolute best interests of all students at all times, never forgetting that each students is ‘someone’s little darling.’ Mary possesses the innate ability to make every student, every staff member, and individual who walks into her office feel special and important because of how she genuinely listens, cares and responds,” said former THS Principal and now Assistant Superintendent of Education Services Trevethan, who worked with Venema for 25 years.

Over the years Venema has never tired of her work.

“Every year is different and watching the kids grow has been amazing. The only sad times are when we lose a kid, which has happened periodically over the years. But I can’t really say that I’ve had a bad work-related day,” Venema said.