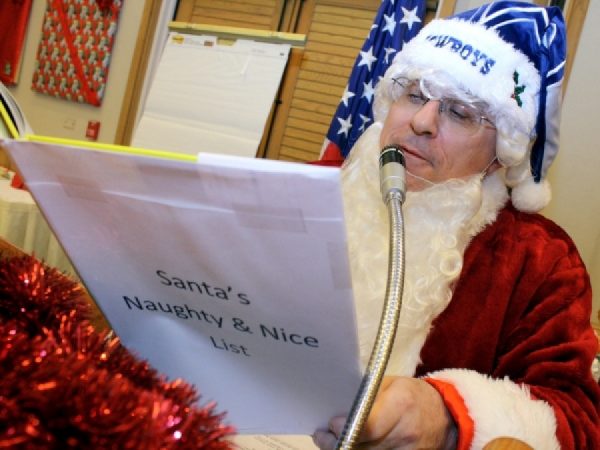 With the holiday season full of shopping, parties and events, it can be easy to forget those everyday things. And criminals, like the rest of us, can get caught in the web of holiday entrapment this time of year.

The absent-minded forgetfulness begins Friday when Russell Robinson, 50, was arrested for burglary at 4:46 p.m. in the 2100 block of Fulkerth Road after entering a business and placing items in a bag. The problem was Mr. Robinson forgot to pay before leaving the business. Mr. Robinson evidently had a nice hand-written list of items, undoubtedly a Christmas shopping list for loved ones. Clearly just an honest holiday mistake, Mr. Robinson. It is rumored that as Mr. Robinson was being hauled off by police, the staff at the business began to sing “These handcuffs are for you Mr. Robinson, don’t you know you can’t take without paying… ho ho ho.”

Later, just after 12 midnight on Saturday morning, Maksim Tsymbal, 20, was arrested for DUI and possession of a loaded firearm in the 1100 block of South Rose Street. Through a source at the North Pole TurlockCityNews.com has confirmed that Tsymbal will be on Santa’s Naughty List this Christmas.

At 3:25 a.m. on Saturday Cameron Linan, 21, male, was arrested at the intersection of Christoffersen Parkway and Kilroy Road for fighting in public and possession of prescription medication without a prescription. He must have forgotten to take his holiday happy pills.

Rafael Carrasco, 54, also forgot to take something – the number to a taxi, and perhaps an after-dinner breath mint. Just after 6:30 p.m. Carrasco was arrested for DUI after he was found passed-out behind the wheel of a running vehicle in the 4000 block of McKenna Drive.

Beena Mehta, 54, was another person who forgot something… she forgot to leave. Mehta was arrested for trespassing at 8:11 p.m. after refusing to depart a business in the 3000 block of Countryside Drive.

Earlier in the week on Dec. 2 a young man learned the “folly” of his ways. At 11:04 p.m. at the intersection of Canal Drive and Golden State Boulevard, Matthew Dalke, 32, was stopped for a traffic violation and found to have his driving privilege suspended. He was issued a citation and released. However, his navigator (or passenger), Joseph Folly, 23, must have raised suspicions through his odd behavior. Police discovered Folly’s folly – he was in possession of methamphetamine and was arrested and booked.

At 1:21 a.m. on Tuesday Angel Banderas, 21, was arrested for vandalism and resisting arrest after causing a disturbance in the 1400 block of Golden State Boulevard. Perhaps he was upset after his favorite team lost on Monday Night Football, and he later took his sorrows out on an unknown object.

Later, at 8:30 a.m. at the intersection of Taylor Road and Golden State Boulevard, a police officer spotted a suspicious tractor without a trailer. The officer checked the plates and discovered the tractor had been stolen. Eddie Gois, 41, was contacted as the driver of the tractor and was arrested and booked for possession of stolen property and, as luck would have it, an active felony warrant for fraud.

At 11:29 p.m. Wednesday Gary May, 30, was involved in a road rage incident that turned ugly at the intersection of Olive Avenue and Golden State Boulevard. Turlock police say May was arrested and issued a citation for assault and battery after a physical altercation with presumably another driver. No other details were released.