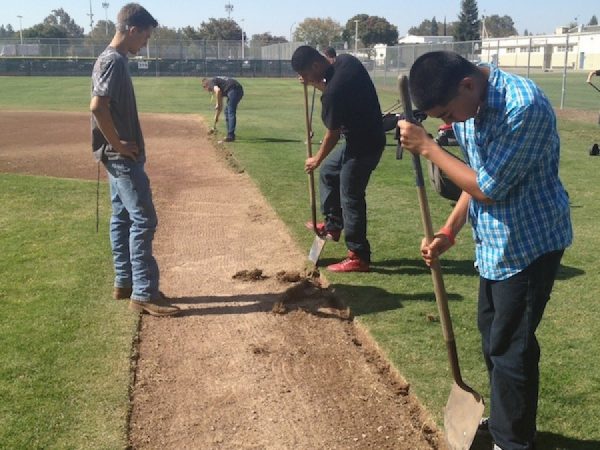 The Turlock High School Agricultural Education Department was the victim of yet another theft over the holiday break.

The equipment was used for Principles of Turfgrass Management, an introductory course in the maintenance and management of turf grasses that includes sports athletic fields, golf courses, parks, cemeteries, commercial, and residential lawns. Life skills such as resume building, job applications, interview skills, college and scholarship applications are also part of the course.

In November someone stole $5,000 worth of small engines from the exact same locked storage container. Department Chair Chad Russell and students had erected a security fence, however the fence was not yet fully completed – it was scheduled to have the final touches finished this week.

It is unknown at this time exactly when the theft took place, but it likely happened in the last several days.

Turlock High School Principal Marie Peterson was beside herself with emotions regarding the latest theft.

“It’s so devastating and frustrating for us,” Peterson said. “I feel like crying. This is a class that is currently being offered and the students in that class work on the baseball and softball fields, which they would be preparing for the upcoming season right now. This class was my baby, we worked so hard to get the funding for this and to get donations from the community. A lot of these kids are special education students and it’s like they are stealing candy from a baby by stealing this equipment.”

After the November theft, community members donated over $10,000 towards replacing the stolen small engines. Chad Russell’s sister, Aimee Russell launched a GoFundMe campaign which was bombarded with money, along with numerous personal checks from organizations and individuals. Aimee Russell says the account remains open should people wish to donate. It can be accessed at: www.gofundme.com/5j0fpk .

“My brother has dedicated his whole life to that school and his students, and to assure they have a proper learning environment and these dead beats (thieves) are ruining that,” Aimee Russell said.

“We're hoping if anyone in the community has information on this theft they will contact the Turlock Police Department. The students in this class were just gearing up to work on the softball and baseball fields so we are all obviously upset and hope the whoever stole this equipment will be apprehended,” said Peterson.

Peterson says that discussions were held to install security cameras, but it was decided to hold off until computer network and infrastructure updates had been completed at Turlock High School.