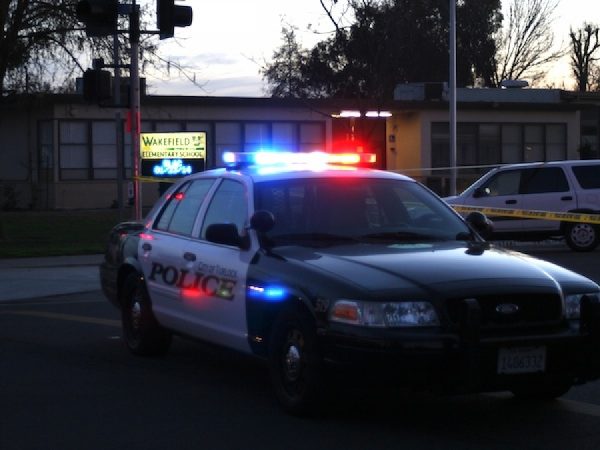 A man was shot near Turlock's Wakefield Elementary School Tuesday afternoon, putting the school on temporary lockdown as police searched for a fleeing suspect.

According to Turlock Police Sgt. Steven Webb, the incident occurred at approximately 4:13 p.m., when persons in a late 1990s or early 2000s Honda started to argue with three other individuals near the intersection of South Avenue and Spruce Street – just across the street from Wakefield Elementary School.

That argument apparently escalated and shots were fired in the middle of the street at the three men not in the Honda. At least one of the men was hit.

Turlock police found the injured man at an area residence, where he apparently ran after being shot. He is suffering from non-life threatening wounds, police said, and has been transported to a local hospital. No further information is currently available about his condition.

The other two individuals apparently fled, according to Webb. It is unknown if they were shot.

It remains undetermined what the argument was about, and why the shooting occurred.

“We're still investigating,” Reid said. “We don't know what might have caused it.”

TurlockCityNews.com will provide updates as they become available.

This article was updated at 7:00 p.m. to include additional information about circumstances of the shooting, the status of the injured man, and contact info of the detective handling the case.