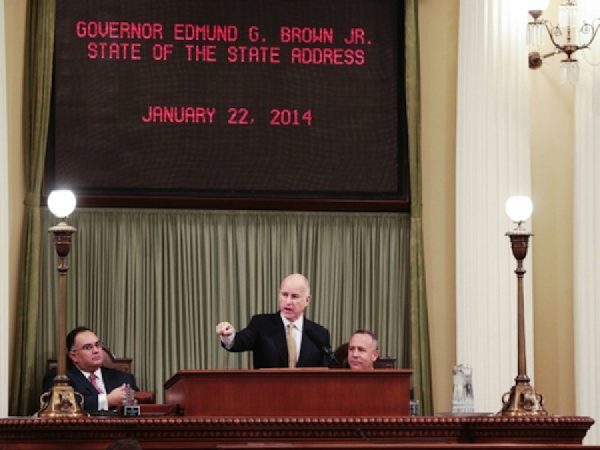 California Gov. Jerry Brown (D) gave his annual State of the State address Wednesday, dashing naysayers with his assurance that California is on the rise, nods to localization of state government concerns and the necessity for conservation in the drought.

“Perhaps [critics] have nothing to say in the face of California’s comeback – except, ‘please, don’t report it,’” said Brown. “Well, I’m going to report it, and what a comeback it is: A million new jobs since 2010, a budgetary surplus in the billions and a minimum wage rising to $10 an hour!”

Brown explained that legislative work and voters are to thank, as Proposition 25 of 2010 and Proposition 30 of 2012 made the difference in pushing California forward financially.

In a pithy pun, Brown admitted that even with California breaking the gridlock “we are not out of the woods and we certainly are not out of the drought.” Because of this, the governor said he realizes the importance in paying down debts and saving money for rainier days is key, be it pensions, health care, road repair, congressional decisions or the Affordable Care Act.

Local Assemblymember Kristin Olsen (R-Modesto) did not seem convinced however. In her response to the Brown’s remarks, Olsen addressed her own concerns.

“The Governor’s message of fiscal prudence would be inspiring, if not for his persistence on High Speed Rail and the Bay Delta Conservation Plan, (i.e. Delta tunnels),” said Olsen. “It is irresponsible to continue wasting taxpayer dollars on projects like High Speed Rail that have no viable business plan and no connection to real needs in the San Joaquin Valley.”

But Brown remained optimistic, commending voters for their move toward fiscal discipline.

“In 2004, the people voted for a rainy day fund which was found to be unworkable,” said Brown. “In 2010, you created another rainy day fund, now scheduled for the November Election. But this latest effort doesn’t give the state the option to pay off debt, doesn’t deal with the ups and downs of Proposition 98 and doesn’t account for spikes in capital gains. So let’s fix these flaws before going to the voters.”

The proposition to which the governor refers, enacted in 1988, can seem complicated with its formulas and “tests,” but in general provides K-14 schools with a guaranteed funding source that grows each year with the economy and the number of students. The guaranteed funding is provided through a combination of state General Fund and local property tax revenues. Currently, Proposition 98 spending makes up nearly 45 percent of California's General Fund.

The governor also spoke of his goal of subsidiarity – placing local issues in the hands of locals whenever the opportunity arises, like with the Local Control Funding Formula. That formula aims to place responsibility in the classroom and at the local district as opposed to Sacramento.

“Last year, I supported the Governor’s Local Control Funding Formula,” said State Sen. Anthony Cannella (R-Ceres) of the governor’s plan to localize classroom responsibilities. “Our local school districts know best how to use their funds. In addition, by continuing to further this new way of funding, we even the playing field for all California students.”

These same strides have been taken in public safety, as many responsibilities have been transferred to local authorities.

In regards to the current drought, Brown reminded Californians of his recent declaration of a State of Emergency and convening an Interagency Drought Task Force.

“We need everyone in every part of the state to conserve water,” said Brown. “We need regulators to rebalance water rules and enable voluntary transfers of water and we must prepare for forest fires. As the State Water Action Plan lays out, water recycling, expanded storage and serious groundwater management must all be part of the mix.”