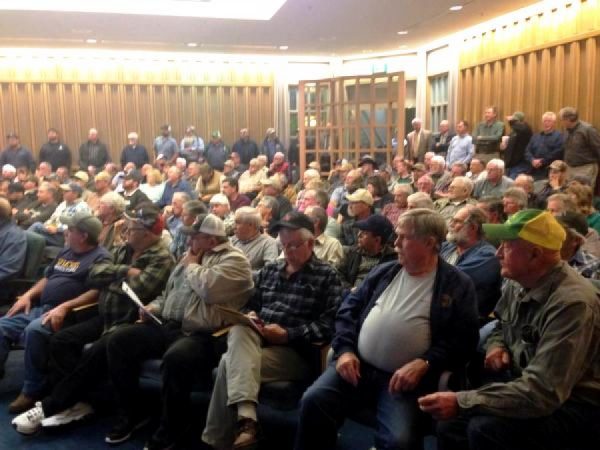 A standing room only crowd packed the Turlock Irrigation District boardroom – and spilled outside of it – as water-starved growers clamored to learn about the district's 2014 irrigation season on Wednesday.

The massive, unexpected crowd even filled the hallways outside of the boardroom. TID staff set up speakers so those farmers who didn't make it inside could hear the presentation – even if they couldn't see it.

"In the last 17 years I've been here at TID I've never seen this many people in the boardroom," said Tou Her, TID Assistant General Manager of Water Resources.

The district traditionally holds grower outreach meetings to discuss the irrigation season in February. But this year TID started early, given the toll dry conditions are taking on farmers.

Concerned farmers, with their livelihoods on the line, waved signs reading "Pray for rain." The signs also bear the bible verse 1 Thessalonians 5:17, reading "Pray without ceasing."

"Conditions are very dire," Her said. "We felt it was prudent to reach out to our growers and our customers as soon as possible."

Just 3.16 inches of precipitation have fallen to date – less than 20 percent of the 19-plus inches expected at this point in the average year. Traditionally the months of December and January combine for 13 inches of rainfall; less than 1 inch fell during that period this year.

Some help is on the way, according to district forecasts. Approximately 2.5 inches of precipitation are expected to fall in the TID watershed in the next two weeks.

"The prudent thing to do (when planning for the irrigation season) is to look at the more conservative approach, which is the dry year scenario," Her said.

In that dry year scenario, TID growers would receive just 22.5 acre-inches of irrigation water, accounting for every last drop available in TID's Don Pedro Reservoir. The figure translates into a soft cap of 20 acre-inches – less than half the water available in a normal irrigation year.

News of the minuscule cap was met with a collective groan from the growers in attendance.

Even with the pumping, a 20 acre-inch cap would effectively drain Don Pedro Reservoir. Only a bare minimum of water would remain in storage, so that TID could meet federally-mandated environmental requirements next year should no rain fall.

"The assumption is that we may not get any more water," Her said.

The irrigation season season would run from March 13 through Oct. 15. That long season would be made possible by more effective management of TID's canal system; wait times for water deliveries would be increased by 12 to 24 hour to better conserve water, customers on gardenhead rotations would only receive water once per month, and the district would crack down on those stealing water, imposing fines of more than $1,000 and potentially revoking water rights for offenders.

Even should a normal amount of precipitation fall from this day forward, growers would likely see the same 20 acre-inch cap. TID would merely carry over 3.5 acre-inches water to next year in storage; in the dry scenario, there is absolutely no carryover water.

The picture isn't finalized, Her said. Things could yet change before Feb. 25, when the TID Board of Directors will make a final decision on the irrigation season.

But even in the wettest scenario forecast, growers would receive just 29.5 acre-inches, well below the 42 acre-inches made available in average year. TID would, however, carry over 27.3 acre-inches for next year in that scenario, improving the outlook for 2015.

And the situation could become even more grim by Feb. 25.

"There's still another 10 percent chance that it's going to be drier than the dry scenario," Her said.

Making matters even worse, the City and County of San Francisco is, effectively, owed water by TID.

San Francisco, which operates three reservoirs upstream of TID, has released nearly 500,000 acre-feet of water to TID in past years. San Francisco can now collect upon that debt by withholding future precipitation which would otherwise head down the Tuolumne River to Don Pedro Reservoir.

The amount of water owed equates to about 14 inches of rainfall.

"We would not even see it at Don Pedro," Her said. "… They could potentially take all of it."

A second growers meeting, discussing the same information as Wednesday's meeting, will be held at 7 p.m. Thursday at the TID Main Office Building, 333 E. Canal Dr.

A board meeting to set the 2014 irrigation season is planned for 9 a.m. Feb 25. Regular grower meetings will be held at 7 p.m. on both Feb. 26 and Feb. 27, in the TID Main Office Building.
{loadposition banbantast}