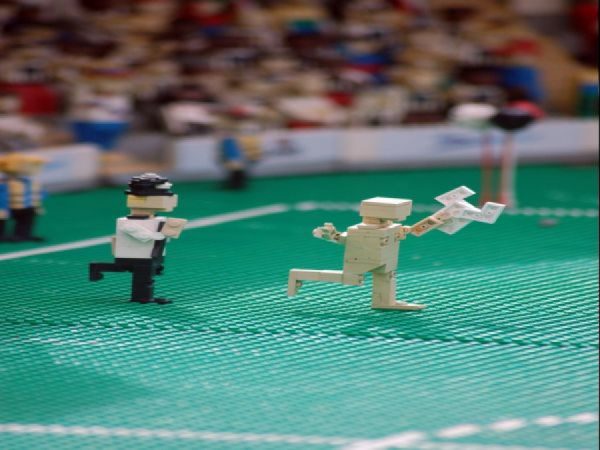 This week’s Weekly Lowlights is a compilation of greatest hits from the Turlock Police Activity Report, packed full of the oddball antics of Turlock’s criminal element.

Beginning on Feb. 12, one young man thought it would be a good idea to go streaking down the middle of the 2400 block of West Monte Vista Avenue – much like the scene from the film “Old School” when Will Ferrell, a.k.a. Frank the Tank, goes streaking with imaginary friends to the gymnasium. Only instead of being rescued by a shocked wife and her disgusted friends, 22-year-old Ryan Griffin was found by Turlock police. He was allegedly under the influence of narcotics and found unclothed and thus arrested at 12:47 a.m. for public intoxication. It is believed he asked officers if KFC was open.

That same day, at just after 10:30 p.m., intergalactic federation captain Carlos Vines, 42, found himself teletransported to a home in the 1300 block of Joett Drive. Vines knocked on the front door of the home, and when the resident answered Vines claimed he knew the people that lived there. But Vines was evidently teletransported to the incorrect coordinates, because no one at the residence knew who he was. Vines was found to be in possession of a fixed blade knife and methamphetamine. He was arrested for possession of meth and possession of the knife. When he was arrested and was quoted as saying, “Scotty, beam me up.” But Scotty never did.

On Feb. 11 Loren Epperson, 56, never made it home after some drinks at his favorite watering hole. Instead of issuing a missing persons alert, police say they just found Epperson passed out on the sidewalk, allegedly extremely intoxicated at 1:41 a.m. in the 400 block of East Main Street. He was arrested and booked for public intoxication.

Later, at high noon, Eduardo Carbajal, 26, was seen by a witness breaking into a residence in the 4300 block of Bardini Way. Police responded and say they saw him coming out of a back yard with an allegedly stolen bicycle. Carbajal took off quickly on “his” bike, but when officers attempted to capture him he fought them off and took off again. The police don’t really give up that quickly, so they continued pursuit of the slippery simpleton onto a canal bank near Taylor Road. Once again he put up a fight with officers because likely, in his mind, the officers are just persistent jerks who won’t let him be. Carbajal was arrested for burglary with an additional charge for resisting arrest. Oh, and as luck would have it he was a parolee so he got a parole violation tacked on.

At 3:42 p.m. Ricky Keeney, 54, was arrested for robbery after he snatched a lady’s purse in the 600 block of Chestnut Street.

On Feb. 10 Andrew Sanders, 27, was caught stealing a sign from the back of a business in the 100 block of South Broadway. Of course Sanders had a prior conviction for theft so he got a felony. Allegedly the sign read, “parking for losers only.”

Speaking of, later that day, at 11:14 p.m., a witness called in a car that had been parked for a an extended period of time in front of a drive-up ATM at the Bank of the West on Fulkerth Road. Police responded to find Kuldip Johal, 34, allegedly driving under the influence, in illegal possession of a prescription medication and possessing a loaded handgun. He was arrested on all three charges. Perhaps Johal was sitting at the drive-up ATM for so long because he dropped his ATM card in the slot between the driver’s seat and the middle console, just behind the seat belt lock. If you’ve ever had that happen to you it can take forever to get your card out of that abyss.

On Feb 9, Jason Erbele, 32, was arrested in the 100 block of South Broadway just before 1:30 a.m. Evidently Erbele allegedly committed battery after an argument over the use of a restroom. Sounds like someone couldn’t hold their urine any longer. Perhaps Erbele needs to invest in some adult diapers, although he seems a tad young – but hey if Tony Siragusa of NFL fame can “guard his manhood” with some adult diapers so could Erbele.

At 6:10 p.m. on Feb. 6 Angelo Pacheco, 31, was arrested and booked for two counts of possession of stolen property and commercial burglary after he attempted to return merchandise to the GNC on Countryside Drive that had allegedly been stolen from the GNC in Modesto. Like many people this time of year, perhaps Pacheco had given up on his New Year’s resolution to get swole and he no longer needed those protein powders. Perfectly understandable.

Later that night, at just before 12 midnight, Stacey Kelley, 25, was reported by a witness to be allegedly heavily intoxicated and having a tough time getting into her car. She must have been playing that game “put the key in the hole” – but the hole kept spinning. In any event, when police showed up they found her passed out behind the wheel of her parked car in the 100 block of West Main Street. She was arrested and booked for public intoxication, in this case – perhaps fortunately.