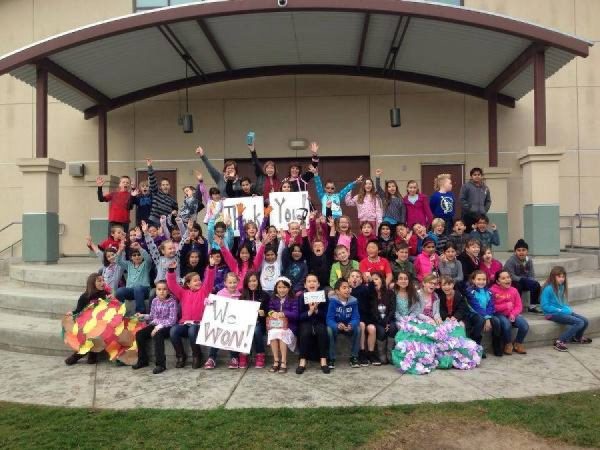 “We are on cloud nine,” said Walnut Principal Mark Holmes. “We won and the whole school is exuberant.”

The contest tasked schools with developing a video explaining the importance of trees. Ten national finalists were selected from hundreds of submissions, and an online vote determined the ultimate victor.

Despite falling behind in the vote heading into the final days of the contest, Holmes believes a continuous outpouring of community support led to the victory. Along with the title of champions, Walnut Elementary Education Center will receive a grand prize of $10,000, along with a tree planting event and entertainment package.

The school that temporarily overtook Walnut at the top of the standings, Kersey Creek Elementary in Virginia, had a celebrity endorsement and shot up in votes. However, Walnut had a consistent stream of votes.

“This was grassroots effort of parents, relatives, friends and media support. Including TurlockCityNews.com and the wonderful support you guys gave us getting the word out,” said Holmes.

Holmes says in the coming weeks Scotties will notify the school of the exact date of the tree planting and entertainment ceremony.

Several third-grade classes in the Renaissance and Visual Performing Arts magnet program made the video for the Scotties Trees Rock Contest. Out of thousands of submissions nationwide, Walnut was selected as one of 10 national finalists. Walnut was also the only school from California selected into the final 10.

The video features Walnut students speaking about the importance of trees in the Central Valley, as well as a catchy tune based off the popular song “When I’m Gone.”

At the end of the video the students explain some of the projects they would like to complete with the prize money.

“If we win we’d like to plant more trees around the playground to keep us safe from the sun’s harmful rays and to keep the slides cooler, and we’d like to save more trees by using less paper and typing on a computer instead,” students said.

In the 2008-2009 school year Walnut won a similar national contest with Sarah Lee brand bread. In that contest the school won $25,000 and received a celebrity visit by stars from High School Musical.