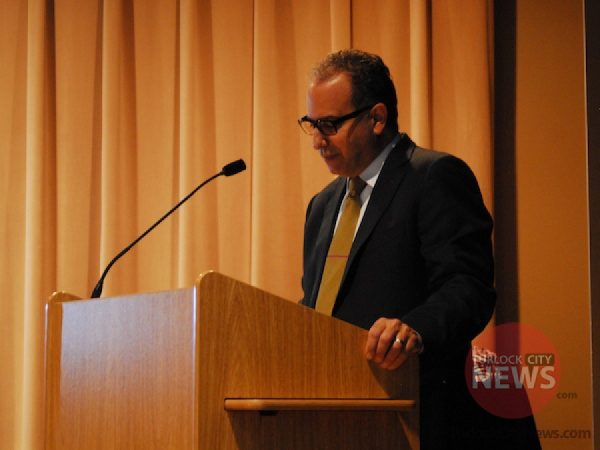 “The state of our city is strong, and growing stronger,” Lazar said.

There were no big surprise announcements during this year’s State of the City address, delivered as usual during the Turlock Chamber of Commerce’s Annual Membership Breakfast at the Carnegie Arts Center. In recent years, Lazar broke news of Old Navy’s impending arrival and his Economic Development Task Force.

This year, in his eighth State of the City address and 22nd year spent serving the Turlock City Council, Lazar focused on the successes of 2013 and the challenges that await in the year ahead.

A few years ago, when Turlock was synonymous with red tape, that would not have been the case.

“Over the last few years, city hall's culture has changed,” Lazar said. “We have asked the hard questions and made the necessary changes.”

Now, thanks to the efforts of the city and the newly-formed Mayor’s Economic Development Task Force, Lazar says that Turlock is becoming known as a place for high-tech ag businesses to locate.

“We are well on our way to becoming the Silicon Valley of a new generation of high-tech food processing,” Lazar said.

“This project will serve our community for decades to come,” Lazar said.

Even though crime has gone up as the city deals with realignment, a state plan which ultimately released some less-violent criminals into the community, Turlock is seeking solutions like hosting probation officers at the Public Safety Facility. And the Fire Department has actually improved its service to become a “Level 2” agency, which should save Turlockers money on fire insurance.

Lazar pointed to new community partnerships to prevent crime, and even a move to go green at the Turlock Police Department with hybrid cars and electric scooters.

Yet one major challenge faces Turlock in 2014: Water.

“It appears we are facing what will be the most severe drought in 100 years,” Lazar said.

Turlock has been diligent in past years, installing water meters in 2006 – years ahead of a state mandate to do so. Those meters led to a sharp decline in water usage to what is now an all-time low per capita; Turlock pumped as much water in 2013 as it did in 2000, when it had 17,000 fewer residents.

But still, Turlockers need to conserve more. The water in Turlock’s aquifer, which supplies 100 percent of the city’s drinking water, continues to decline in both quantity and quality.

“I have my kids at home setting a timer while in the shower,” Lazar said.

Turlockers could face increasing water rates this year, as the City of Turlock prepares to begin treating its water to address declining quality. And rates could go up even higher if a proposed surface water treatment plant, which would turn Tuolumne River water into drinking water, becomes a reality.

“In 2014 I look forward to meeting the challenges with you as we celebrate our collective accomplishments,” Lazar said.