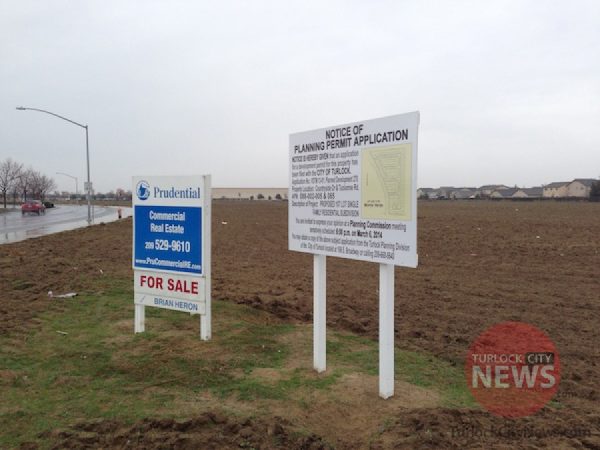 Turlock’s first new subdivision since Great Recession is one step closer to reality.

“I think things are rolling along really good as we move forward,” said Scott Dorias, an attorney representing the project.

The project’s subdivision map still awaits final approval from the Turlock City Council. That process will likely take a month.

And then, before too long, construction may start.

“Hopefully we can start next spring on the off site improvements, and move forward next fall on the houses,” said Randy Bling, director of planning and purchasing of Florsheim Homes.

The homes will sit on lots ranging from 4,500 square-feet to 12,170 square-feet, according to Turlock Associate Planner Katie Quintero. On average, the development will feature six units per acre.

Per the terms of approval, Florsheim Homes will construct an 8-foot tall, ivy-covered masonry wall along Countryside Drive to cut down on road noise. A similar 7-foot wall will be built between the residential development and the existing Monte Vista Crossings area that includes Home Depot.

The development will also remove the existing sidewalk on Countryside Drive, cutting it from 10 feet in width to 5 feet in width, and install a 9-foot landscaped area between the sidewalk and the wall. The change comes as the Turlock Irrigation District would not be able to fit its utilities into the easement if an initially-proposed 4-foot landscaping area was built between the existing 10-foot sidewalk and the needed wall.

But the added landscaping area could improve the look of the development – at no cost to the city. Homeowners will pay for all landscape maintenance through annual assessments, allowing the City of Turlock to maintain the area at no cost to the General Fund.

“I think it's actually going to be better for the city in the long run,” City Engineer Mike Pitcock said.

Another exception to traditional standards will allow five lots to have as little as 30 feet of frontage onto the subdivision’s streets. Turlock code normally requires 35 feet of frontage for every home, though the exception was needed to allow for some cul-de-sac lots.

The subdivision’s entrances and exits will also feature acceleration and deceleration lanes, so as to minimally impact traffic.