Kcody Rogers is a “Student Succeeding” 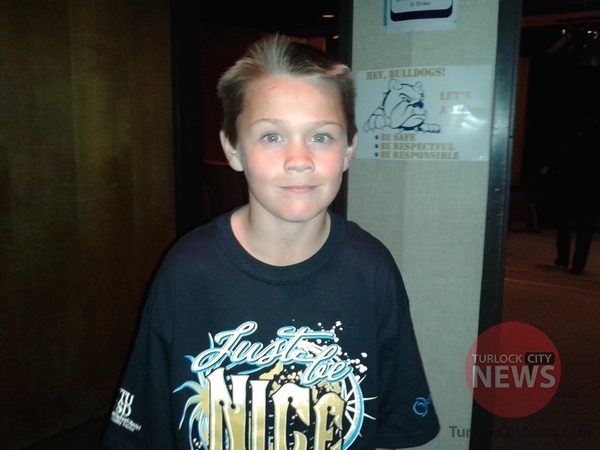 Imagine being five years old, starting kindergarten in California, and two months later moving to Arkansas because you and mom are homeless and trying to survive. Fast forward five years, two states and seven schools later and find yourself entering the same school you began your educational career in.

That is the story of Kcody Rogers, 10, a fourth grader at Julien Elementary School in Turlock.

Last month Kcody was awarded with the “Every Student Succeeding” award from the Stanislaus County Office of Education, which recognizes children who have overcome enormous challenges and gone far beyond expectations.

Kcody and his mom remain essentially homeless and life is still incredibly difficult. But the tenacity and significant perseverance demonstrated by Rogers is a message most people could learn from.

Thanks to the Turlock Family Resource Center Kcody and his mother at least have a roof over their heads.

Life and school were difficult for Kcody. His last school reported to Julien that he had 18 discipline referrals with detentions and suspensions for inappropriate, hostile and defiant behaviors. He did not complete homework or work independently and was an angry child.

But the nurturing environment at Julien has worked wonders in his heart and developed his love of learning.

Julien Principal Linda Murphy-Lopes says that since enrolling at Julien in August Kcody has had zero discipline referrals and has earned the Caring Character Counts award for his class. He is learning to ask for help with assignments and has improved greatly with homework and classwork assignments. The only absences or tardies on his records this year have been for counseling or medical needs pertaining to his ADHD and PTSD diagnosis.

“Kcody is a true gem who believes he is important and a valuable asset at Julien School because his teacher, campus supervisors, office staff and administration always take time to listen to him,” said Murphy-Lopes.

Kcody says his teacher, Mr. Hazelton will sometimes keep him in at lunch to work with him and others who are stuck or unable to comprehend the specific task or assignment. Furthermore, he sees this as a connection of support, not punishment, because his teacher treats him with respect and dignity at all times.

Kcody’s ultimate goal is to graduate and pursue a career in law enforcement because he believes laws are made to protect people and those in need. As a homeless child, he has had many encounters with the law. However, as scary, ugly and hopeless as he has felt in those moments, he still believes they have had his best interests in mind in all interactions.

Kcody credits Mr. Hazelton, his counselor Corina and his Mom as the most influential people in his life right now. He wants to show them that he can learn, will learn and is becoming a proud member of our community. Kcody says his future has many holes but he and his mom will overcome homelessness if they stick together and remember to take care of each other.