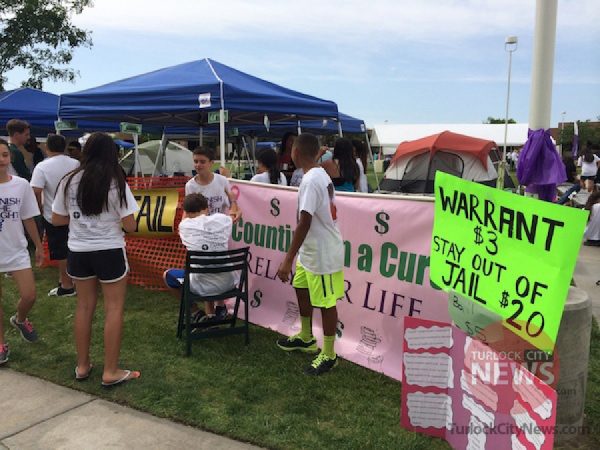 Team members powered around the makeshift track at Pitman High School Saturday, celebrating, remembering, and fighting back for Relay For Life.

Green grass, colorful tents, and the smiles of those participating filled the Turlock school’s campus for 24 hours, including people from all walks of life.

Local business Winton, Ireland, Strom & Green, Light of Christ Lutheran Church, Covenant Village, and even Target all set up booths and camps for the event, committing their time to Turlock’s portion of the national American Cancer Society fundraiser.

The team Fighting for a Cure held the lead Saturday afternoon with nearly $10,000 raised as a group towards the cause. At their booth, the team set up tables showcasing months of hard work canvassing Turlock and the surrounding community: raffle gifts and baskets donated from local businesses and corporations from Stewart & Jasper to Starbucks.

Fighting for a Cure’s goal of $7,500 was far surpassed early in the 24 hour Relay For Life, allowing a sigh of relief for team member Michelle Gomes and giving her a huge smile. The theme for this year’s event “Finish the Fight” proved appropriate for the Fighting for a Cure team, as Gomes’s parents and teammates are both cancer survivors. Her mother, Bev Perry, survived breast cancer and served as team captain this year to keep fighting for a cure. Gomes’s father, David Perry, is a survivor of skin cancer.

Around the track, people walked with water bottles in hand pausing at booths to chat with friends and family. Counting on a Cure’s team captain Pablo Rodriguez explained that his team also was centered around family and friends with his wife Felice and their children working alongside him. Counting on a Cure ran a parody “jail” this year, offering Relay-For-Lifers the opportunity to (temporarily) arrest their friends and loved ones.

A customer comes and donates $3 dollars to the jailers, who then arrest the offender – all in good fun. With a literal “spin” on the usual jail though, a prisoner could spin a wheel to try to lower their bail. One young girl tried the trick, but her bail jumped from the regular $5 up to $8. With a sign on her neck saying “8” the girl held a tin can out to walkers begging to be released with a smile on her face.

Kids and teens love this booth at relays, which has spread from town to town.

Rodriguez explained that no one had claimed the jail this year, so he wanted to go ahead with it on his own team for a second time. Counting on a Cure also sold snow cones to cool off the relayers.

Rodriguez explained that a friend interested him in participating in the ACS event eight years ago, and that he has continued to come out every year since. He has also served on Turlock’s Relay For Life Committee for five years.