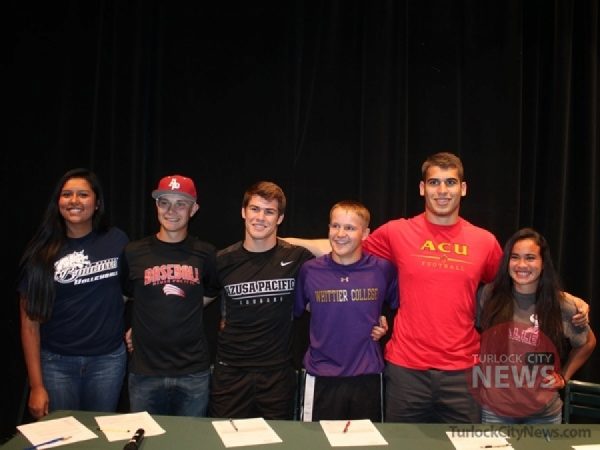 The Black Box Theater was packed with students, parents, and faculty looking to see where Melinda Gonzalez, Dakota Spillers, Logan Wolfley, Drew Lewis, Eric Bejaran, and Sally Acosta would be spending their next four years.

“What we do today is kind of like the end process of everything that these young people have done – the hard work they have put in,” said Pitman Athletic Director Dave Walls. “Maybe the two-a-day practices, maybe three, playing not only here at school, but with their competitive team or traveling team or whatever it might be.”

“It’s with great pleasure that we’re able to add to a long list of athletes, student-athletes who have gone from Pitman and on to play at college at one level or another,” said Walls.

That long list of student-athletes includes star quarterback of the San Francisco 49ers, and Pitman alum, Colin Kaepernick, who declared to play football at the University of Nevada, Reno in 2006.

Each student-athlete received high praise from Walls and their respective coaches.

Gonzalez will be staying close to home to continue her athletic career. The senior earned first team all-league honors in the Central California Conference for the 2013 season.

Her coach, Kristen Pontes, praised her energy on the court and many audience members got a kick out of a picture of Gonzalez showing her ferocious energy.

“She’s one of those players … she gives so much enthusiasm, and she just lights up the court,” said Pontes. “… We’re going to miss her, although she’s right here in Merced, so I’m really excited that we can go watch her. So congratulations, I’m very proud of you.”

Baseball star Spillers wasn’t a slouch on the diamond by any means. Coach John Acha called him a “utility” for the team, who was asked to play several positions and did so happily. Spillers will now be heading south to play baseball at Azusa Pacific University.

“If there’s any player that deserves to go off and play college ball it’s you. He’s the kind of guy that’ll run through a wall for you,” said Acha. “… He’s just always been one of the special players you love to coach, and I’m going to miss you a lot bud.”

Wolfley, winner of the National Football Foundation National High School Scholar-Athlete Award, may be the most well-known of the six honored. The two-sport star (football and wrestling) will continue his football career by joining Spillers at Azusa.

“We’re really going to miss his leadership. We’re all so proud of the accomplishments that he’s achieved,” said Pitman football head coach Tom Tyler. “… We know you’re going to make us proud. We’re really proud of you going forward with people saying you came from Pitman High School and from this football program.”

Many believe that only the biggest and fastest excel at sports, but Tyler assured that this was not the case. He used the undersized two-sport star (football and baseball) Lewis as an example, who is now heading to Whittier College to play football.

“For any of you guys who think you’re maybe not big enough, not fast enough, not strong enough, Drew has been an outstanding athlete for us on both sides of the ball,” said Tyler. “… He’s a competitor and, again, he did everything he needed to in the classroom to go to Whittier.”

All of the athletes honored excelled in the classroom, as well as on the field or court. All six students had GPAs higher than 3.00.

While size may not be the only thing that matters in athletics, Tyler couldn’t help but talk about Bejaran’s size when he joined Pitman during spring of his sophomore year.

“Eric came to us … and it’s one of those things as a football coach you say ‘oh, look at him, please be able to run’ and he could run,” said Tyler.

Bejaran’s size allowed coaches to move him to play defensive lineman, the position he is now heading to Arizona Christian College to play.

Pitman wrestling coach Adam Vasconcellos also had high praise for Bejaran, and said he was highly recruited to hit the mats.

“I don’t think I’ve ever chased a kid around campus more than this kid,” Pitman wrestling coach Adam Vasconcellos saif. “I offered to bring him food, carry his backpack, do whatever it took to get him to come out and wrestle. … And he was the difference for our team.”

Not many high school student athletes get the chance to play collegiate sports, but even fewer have state officials meet to discuss rules based on their talents. Acosta can say she’s done both. Coach Joe Lewis told the audience of a special talent Acosta has, where she can pitch right- or left-handed. State officials held a special meeting to discuss the rules of this. Lewis also praised her athletic ability.

“Sally is a tremendous athlete. She’s a multi-sport athlete and in softball she’s literally probably, over the years that I’ve been here, the most athletic,” said Lewis. “… I know she’s going to continue on as a great student and I’m proud of you.”

Coach Chris Wolfley closed the event with some encouraging words for those student-athletes hoping to be in this position in the next few years.

“For those you that are the younger guys coming up, it took an awful lot of work to get here, but it can be achievable. You have to persistent and you’ve gotta be disciplined, but more important that all that, you have to keep your dreams out in front of you.”