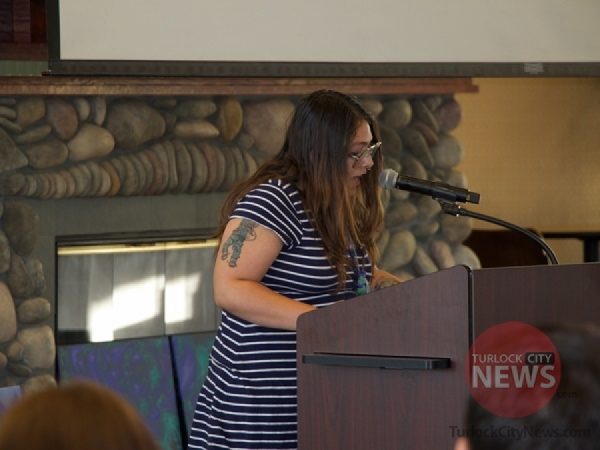 A week ago, California State University, Stanislaus held the annual reading for Penumbra, the campus’ art and literary magazine

Penumbra is run by the students, and contributed to by artists all around the world.

The reading was held in Main Dining, one of the many venues at CSU Stanislaus which boasts a number of tall windows that look out on the campus. The room was filled with tables bedecked with coastal-colored tablecloths and nautical centerpieces filled with sand and shells. This was primarily to complement the cover of this years’ Penumbra – Kayla Seabourn’s photograph entitled Aquaholic.

Thirteen contributors were present to read their contribution to the magazine this year. First was Val Morehouse, who read “Driving San Joaquin” and “Pow Wow.” Following Morehouse was one of Penumbra’s few high school contributors, Brooke Chau, who read “Ode to Letting the Light In.” Vanessa Brazil, a regular contributor, read her piece “Nothing to See Here,” and was followed by Nancy Haskett who read “Shadows and Reflections” and “Slip Shod.”

Jessica Dickman, the Penumbra Club Vice President, read several pieces, among them “Abstract Cave Drawings,” “Inherent Inherit,” and “That Word” – the last of which tells the story of her childhood foray into expletives.

“In comparison with issues from the past couple of years, 2014's Penumbra is much more edgy,” Managing Editor Jessica Dickman told the Signal. “Though we have our usual nature poetry, some of the pieces that the class selected were dark and tortured. There is a clear balance of light and dark, but I think the edginess of this issue speaks to the environment we are living in today.”

In no poem was this “edginess” more obvious than in Heaven Lindsey-Burtch’s “Because We Like to Look At It,” a poem about her reflections on vaginas after having seen hers in a bath in Japan.

A number of other poems were read, including the painfully poignant “Alzheimer’s” by Jacqueline Hollcraft, a piece which utilized blanks and redactions in order to properly convey the feeling of Alzheimer’s. Unfortunately Hollcraft was not present to read the piece, but Jesse Wolfe, the Faculty Advisor for Penumbra, did a very moving job of it.

To those who are interested in being a part of Penumbra 2015, submission guidelines can be found at www.csustan.edu/English/Penumbra.

Pictured: Heaven Lindsey-Burtch reading her poem entitled “Because We Like to Look At It.” Photo by Angel Villagomez.