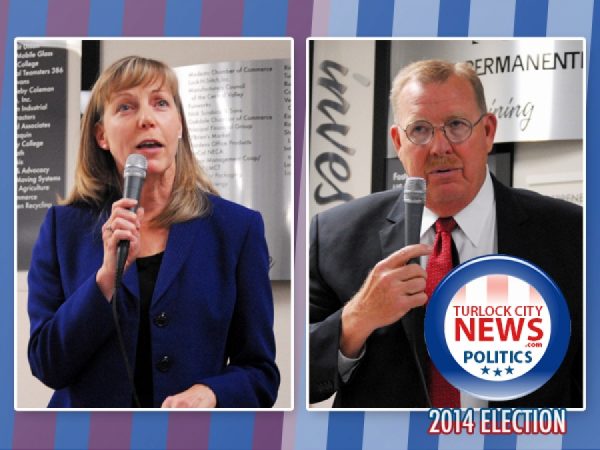 Carson and former Modesto Mayor Carmen Sabatino have been funding a massive “Recall Fladager” campaign in advance of the June 3 election. The election is a standard election following the end of Fladager’s second term; she is not being recalled in any way.

For Sabatino, it’s personal. Fladager prosecuted Sabatino for for 10 felonies alleging that, while mayor, he failed to disclose loans and gifts, employed city staff for personal concerns, and voted on issues where he had financial conflicts of interest. The case ended in a mistrial, after jurors deadlocked when some said there was not enough evidence to convict Sabatino. Carson served as Sabatino’s defense attorney during that trial.

Fladager has served as District Attorney since 2006, after a career as a U.S. Navy Judge Advocate General, prosecuting court marshals. She dismisses criticism of her office.

“I think the office does a great says” Fladager said. “We make the community safer.”

But Carson, a Stanislaus County native who has practiced law for more than 25 years, says Fladager needs to be replaced.

“We need a change,” Carson said. I intend to do that, and that’s why I’m running for the office of District Attorney.”

Carson criticizes Fladager’s management style, which he says is based on “fear, intimidation, and secrecy.” He alleges that Fladager engages in “widespread wiretapping of law-abiding citizens.”

And Carson says that Fladager isn’t willing to get her hands dirty and take a case, despite reductions in staffing and an increasing caseload.

“I intend to be a good example, just like the DAs in other counties,” Carson said. “… If there’s a need for a DA to get in and take a calendar, a set of cases, that they’ll roll up their sleeves and do it. That has not happened for the past eight years.”

Carson says the DA’s office needs to be a check and balance on what law enforcement does, not a supporter. He says that Fladager has attempted to defend law enforcement at every opportunity, such as in the killing of Craig Prescott in the Stanislaus County Jail; Carson says Fladager’s description of Prescott’s beating and suffocation do not match what the tape shows.

Carson also says bad morale due to Fladager’s leadership has led to a “mass exodus of experienced attorneys.”

Fladager admitted her two terms have been challenging, primarily due to massive budget cuts. But she took exception to Carson’s claims.

She described her employees as “highly motivated” and hard working.

Fladager pointed to successes despite the hard times, things like a gang injunction on South Modesto and the establishment of the Family Justice Center. She hopes to establish other programs if she wins another term, like an arson task force.

“Gang injunctions are window dressings,” Carson said. “… Don't buy into it. We need a new perspective, and I can offer that.”

Carson says more could have been done, with better management. Money is being wasted, he said.

Carson claims that 26,000 wiretaps were conducted between 2011 and 2013 at a cost of $300,000, resulting in zero convictions. That money should have been spent to hire more attorneys, Carson says.

“I think it’s an important thing to do,” Fladager said. “We give people a second chance.”

That said, Fladager acknowledges a need for more prosecutors – and more support staff. She says it’s inexcusable that some cases take years to prosecute, but attributes the delays, in part, to judges who delay hearings.

“They should go when they’re set,” Fladager said. “They should not be continued. Justice delayed is justice denied.”

The Stanislaus County District Attorney earns an annual salary of $171,003.04.