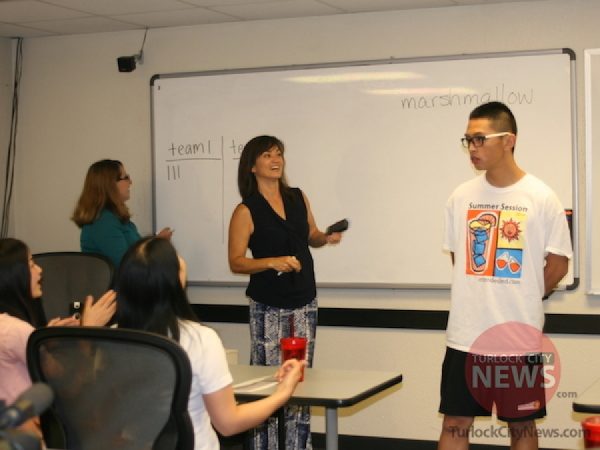 The group of students and faculty come from the university located in Hubei Province, China where President Joseph Sheley previously established a relationship during his time at Sacramento State. The students’ trip began last week and will end July 8.

Sheley wanted this trip to CSU Stanislaus to help further facilitate opportunities for Chinese and American university students to experience each others’ cultures, adding that the current temperatures should feel like home to the visitors as the Hubei Province reaches similarly scorching heat with an approximate added 80 percent humidity.

Visiting the students in their American Culture and Language class taught by English Language program teachers Sheryl Sauter and Sara Shier, Sheley explained to the 14 students that Turlock is a great starting place to visit America, as “it’s safe, it’s comfortable, and people are nice.”

Speaking on his own visit to the Hubei University of Economics in the past, Sheley said that he felt welcomed and comfortable, but also that he knew he wanted the students there to have the opportunity to visit here to experience another culture like he was able to.

During their two-week visit, the students are staying in the university’s residence halls, eating in the “cafe” for resident dining on campus, attending their daily courses, and exploring the city of Turlock. They also have already visited Yosemite National Park, and will still head to San Francisco and a Modesto Nuts game. The students will also attend Turlock’s Independence Day celebrations downtown to experience an American Fourth of July.

CSU Stanislaus junior Anna Ramos is acting as the Chinese students’ liaison during their time in Turlock, showing them the campus, the city, and everyday American life. She explained that it’s been fun introducing them to new foods like enchiladas, different kinds of music and dancing, and taking them to places the average Turlocker visits every week, such as Walmart and Target.

Ramos does not speak Mandarin, so she downloaded an app on her phone that helps her easily translate when there is confusion over a word, but mostly communication has gone smoothly, as the students have been studying English in their schools at home from the time they were children.

In many ways though, the students can feel somewhat “at home.” Sheley explained that the setting of the Hubei University of Economics is similar to CSU Stanislaus in that it also sits in a kind of “grey area” somewhere between rural and suburban.
Still, he explained, this is the first time the Chinese students have all visited America and for most of them, probably the first time they have left their country. Sheley wants to provide the same opportunity for CSU Stanislaus students. Although no formal talks for programs are yet in the works, Sheley has definitely set a goal for university students to someday visit China.

“Let’s say, if a whole two years go by without us sending somebody over there I’ll be disappointed,” Sheley admitted in discussing development of sending CSU Stanislaus students to Hubei.

Chinese students, as he explained, are generally much more familiar with English as a language than most Americans are with learning, in this case, Mandarin.

He explained that it would take organizing the right set of classes for CSU Stanislaus students to attend there, and finding a faculty member or other representative here that speaks both English and Mandarin to go along. Sheley also stated that for a future university trip, he would most likely join the students in visiting.

Though the average person may not think to consider it, Sheley said, the Central Valley already has connections to China with the great amount of nut exporting the area sees. But the trip hasn’t been strictly “business” for students, a lot of fun and culture are being mixed into studies.

Kim Chen, approaching her fourth-year at the Hubei University of Economics, reflected on her visit so far and the fun and learning to come.

“I think it must be one of the most significant memories we will treasure our whole life,” said Chen, adding that CSU Stanislaus’s facilities are “fabulous” and that working out with Turlock students at the Student Recreation Center, she could see that “their shape is really good.”

“We always make everything serious in our country but I think having fun is the most important thing to bring back,” said Zeng.

The guests will also have the opportunity to attend a Modesto Nuts baseball game and visit San Francisco and Yosemite National Park. President Sheley will host a BBQ-picnic on the eve of their departure as well as an awards ceremony for them. The students will then go to southern California before returning home to China.