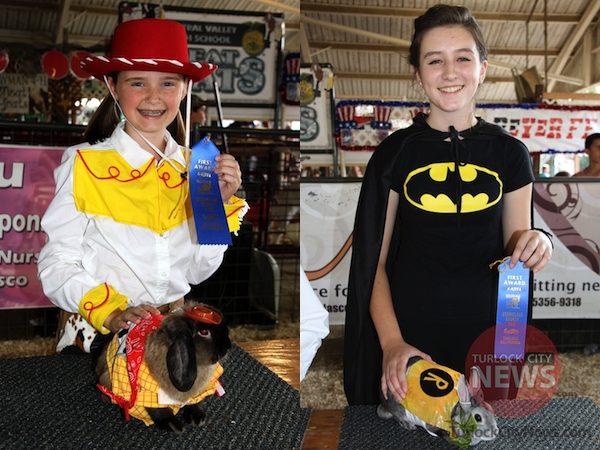 More than two-dozen 4-H youth showed off their fashion genius… on rabbits and poultry Tuesday at the Stanislaus County Fair during a rabbit and poultry dress up competition.

There were furry, cute rabbits dressed up as Tinkerbell, a 1920s flapper, Woody from Disney’s Toy Story, a gaucho, and even a chicken dressed up as a gold miner.

For many of the 4-H youth, the idea to participate in the competition was a fun idea, including Danielle Batezell, 11, of Orange Blossom 4-H. Her rabbit, JJ, was dressed up as “the gaucho.”

“I thought since he already looks like he is wearing a pair of pants it would be fun and easy to dress him up,” said Batezell.

JJ was dressed in a traditional gaucho sombrero, which Batezell took off an old teddy bear, a serape, made from an old towel and, to complete the ensemble, a guitar, which was lifted off a Taylor Swift doll.

Orange Blossom 4-H had the largest and most awarded contingent of participants at the competition.

The winner for the “Imagine The Fun” category was London Ringeisen, 10, of Orange Blossom, who had her rabbit, Eugene, dressed up as Woody from Toy Story and herself as Jesse.

The winner of the “Most Creative” category was Samantha Sanchez, 16, of Orange Blossom. Her rabbit, Promise, had previously promised a victory at the competition and was dressed up as Robin to the caped crusader, Sanchez, who was dressed as Batman.

Sadly the poultry competition laid an egg, as only two of 10 registered competitors showed up — likely due to the 100 degree weather.

However, Jack Tienken, 11, dressed up his chicken, Fred, in a gold miner costume and won first place. Runner-up Koryn Marquez, 12, of Empire 4-H, dressed up her turkey, Braspen, in appropriate fashion, a 4-H uniform.

In case you missed the fashion exhibition, there is another competition on Thursday beginning at 8 a.m. with cavi, rabbits, and poultry for youth ages 8 and under.