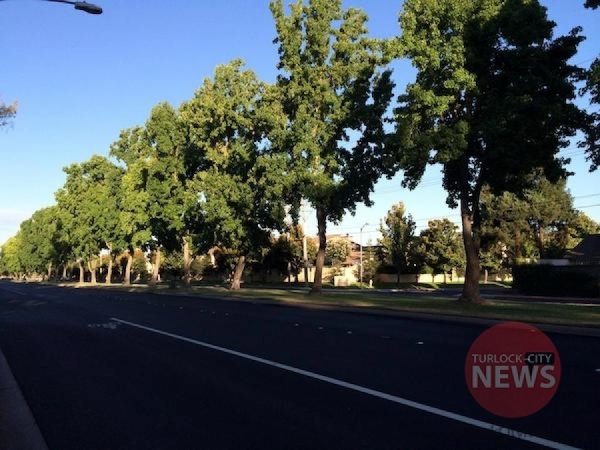 With recent outcries from the public pointing out the who’s who of water-wasters, Parks, Recreation and Public Facilities Manager Allison Van Guilder took to City Council Tuesday night to provided a staff update on the City’s landscape water conservation.

The presentation was a follow-up of decisions the department had made in regard to landscape irrigation conservation.

“If you’ve been traveling along Monte Vista or Christoffersen, you may have noticed that our live turf medians are starting to show some signs of stress,” said Van Guilder. “That’s in response to a decision that we made to reduce the watering in those areas.”
Turlock participated in the grant funding with the City of Modesto and the City of Hughson.

According to Van Guilder, Municipal Services submitted a state grant for funding to redesign those live-turf medians with landscaping that is much more drought tolerant, and that will require much less irrigation and “hopefully address the concerns that those two locations have in regard to water on the roadway and that type of thing.”

The City filed the application for the grant by July 21. According to Regulatory Affairs Manager, Garner Reynolds who led the application process, there were a total of 39 grant applications requesting $339 million in funding for projects totaling in excess of $970 million, and there is $200 million available statewide.

According to Reynolds, “the funding is a Proposition 84 Chapter 2 Integrated Regional Water Management (IRWM) Grant Program, administered by the State Department of Water Resources (DWR). The Governor and Legislature have directed DWR to expedite the solicitation and award of $200 million (of the $472.5 million) in IRWM funding to support projects and programs that provide immediate regional drought preparedness, increase local water supply reliability and the delivery of safe drinking water, assist in the implementation of water conservation programs, and reduce water quality conflicts created by the drought.”

It is anticipated that the funded projects will be announced in September 2014.

“This is an interim step until we get to the point of being able to redesign those areas, but we thought that with the drought situation, the way it is, it was prudent for us to take some steps.”
Turlock participated in the grant funding with the City of Modesto and the City of Hughson.

Van Guilder explained that the department appreciates the community’s understanding and support of their decision, as she understands it’s unusual to see dead and dying greenery in Turlock’s parks, medians, and other areas maintained by the City.

“Our staff is having, probably, the most difficulty accepting that because they pride themselves on keeping things as green and usable as they can,” said Van Guilder. “But we recognize that the drought situation is a game-changer for us and so we’re taking those steps to conserve.”

Van Guilder explained that Parks and Recreation will cater to trees enough so that they get adequate water, and won’t lose trees, but it’s likely that the City will lose the live turf.

“But that will be replaced eventually with, as I said, something that’s drought tolerant and still aesthetically pleasing,” said Van Guilder.

The other area the City is going to be making some changes to relative to conservation is with Turlock’s spray parks, located at Broadway Park at 501 N. Broadway Avenue and Columbia Park at 595 High St. Parks will not be shut down, but instead see limited hours now that Turlock children are back to school.

“This is a challenging one for us, because we take heart in making sure that we have safe alternatives for children in Turlock to stay cool,” said Van Guilder. “We are not proposing a complete closure, if you will, but in response to school starting on Monday, we felt that it was reasonable to simply reduce the number of hours that the spray parks are available so essentially when school’s in session, the spray parks will not be available.”

Beginning Monday, the City will run the spray parks from 3 p.m. to 8 p.m., Monday through Friday, and they will be available on normal hours on Saturdays and Sundays from 11 a.m. to 8 p.m.
Turlock participated in the grant funding with the City of Modesto and the City of Hughson.

“So hopefully that doesn’t displace too many users,” said Van Guilder. “We welcome feedback and any questions that the community might have and that’s going to be our game plan for the month of August.”

“What we’re going to do is monitor the temperatures closely,” said Van Guilder. “If we think we can get away with closing them earlier, if we’re blessed with some cooler Fall temperatures, we may consider closing them a little bit earlier, but we’ll keep you informed of that.”
{loadposition banban last}