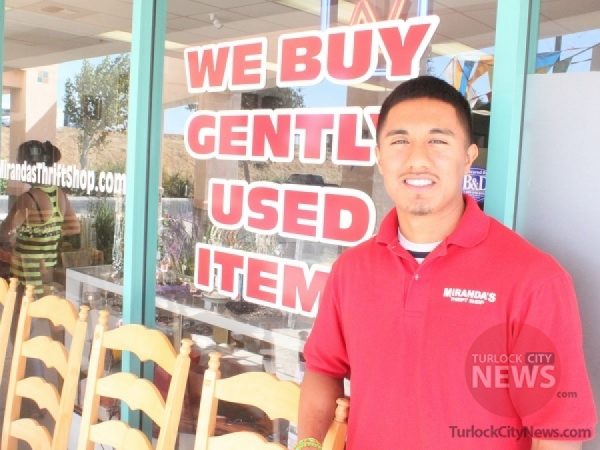 Esteban Miranda, 23, didn’t exactly have a “traditional” college experience. When his friends were out partying and hanging out with girls, Miranda was working essentially non-stop buying merchandise at yard sales and selling them at flea markets up and down the Valley on weekends, a skill that he learned from his parents growing up in Merced.

During his senior year at Fresno State, where he majored in business and minored in entrepreneurship, Miranda began building a stockpile of merchandise for his future business, Miranda’s Thrift Shop.

In 2013, about a week after graduating from Fresno State, Miranda opened his first location on a quiet section of Main Street in Merced. Within a few months he moved to a more desirable location in a Raley’s shopping center in the more affluent north Merced.

In June of this year Miranda opened his second shop, this time in Turlock at 1865 Countryside Dr., next to FoodMaxx.

Miranda says that what makes Miranda’s Thrift Shop different from others — his commitment to quality inventory, plus the fact that he purchases everything in his stores.

“I’m the first to say that yeah, our inventory isn’t the cheapest around, but we only buy gently-used items, we thoroughly clean everything we put out [for sale] and most importantly we pay people for everything in the store,” he said.

Unlike many non-profit thrift stores, which typically take donations, Miranda’s will purchase your unwanted, gently-used goods.

“Why donate your stuff when you can bring it here and get something out of it?” he asked.

Miranda says that donation-base thrift stores certainly help people in need, but he does so behind the scenes.

“My main goal is to help people and the people who I help know what I do,” Miranda said. “I don’t need to post it on Facebook and I don’t do it to get publicity.”

Another aspect of Miranda’s success is a commitment to using social media, such as Facebook, Instagram and Craigslist, to reach potential customers and people selling items.
“We get the word out and we want to purchase inventory and then sell it as soon as possible,” said Miranda. “If you want close to new stuff for half the price or one-third the price of stores, that is what we do.”

About the only thing Miranda’s doesn’t buy and sell is appliances, which Miranda says he is looking to improve upon.

Another interesting aspect of Miranda’s is that they even offer a warranty on all of their items.

“We always test everything we sell, like video game systems, so we have a same day, cash back return policy and a next day, store credit return policy,” explained Miranda. “After that the sale is final.”

Miranda carries a Second-Hand Dealers License and is required by law to list any inventory he buys and who he buys it from.

Within the next year Miranda plans to open another store in Fresno.

“I would be out there at flea markets when it was 100 degrees and some days I would only make $5,” Miranda said about his early struggles. “I didn’t party, I went to yard sales, flea markets and then came home and did my homework. It was tough, I felt like giving up. People would tell me you can’t do, why don’t you get a regular job?”

However, he realized he never wanted to work for anyone else and thanks to his inner drive to succeed, he pushed himself forward and now he is on the verge of breaking the traditional thrift store model.