Two Adults, One Child Killed in Hit and Run 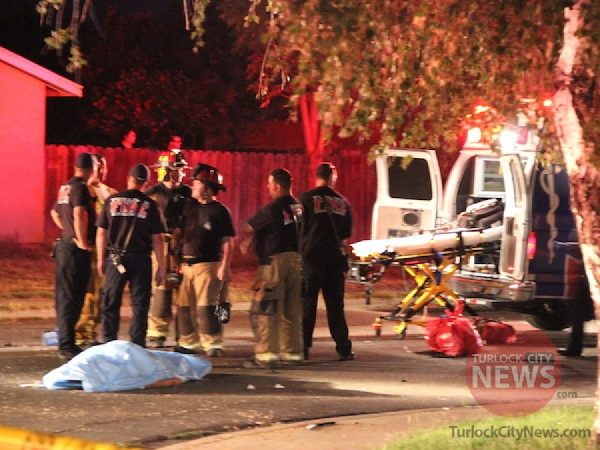 The Turlock Police Department is currently investigating a hit and run that claimed the lives of three victims, including one child.

Officers responded to the intersection of Rockwood Avenue and Boxwood Way on the report of an accident at approximately 7:45 p.m.

Turlock police spokesperson Lt. Ron Reid reports that a white BMW sedan was traveling southwest at a high rate of speed when the driver struck three people walking in the neighborhood.

Of the three victims struck, two adult females were declared deceased on scene and a child, approximately 6 or 7 years old was transported to an area hospital, said Reid.

The child has since been declared deceased.

A fourth subject, an approximately 2 ½-year-old child, was also walking with the victims, but was not hit or injured, said Reid.

The child is now at the Public Safety Facility to be reunited with family members.

None of the victims have been identified at this time.

The driver of the BMW lost control of the vehicle and drove through a residential driveway before striking a stop sign and colliding with a home on the corner of Rockwood Avenue and Boxwood Way.

No one was home at the time that the vehicle collided with the home and no injuries were reported, according to Reid.

Reid has reported that alcohol appears to be a factor in the accident.

After colliding with the home, the occupants of the vehicle fled in opposite directions — one down Boxwood Way and the other down Rockwood Avenue toward Linwood.

The suspect who fled down Boxwood Way was detained by citizens and arrested by police. His identity is not being released at this time.

The second suspect reportedly entered a home on Linwood Avenue, but when officers attempted to make contact with the homeowners, they were uncooperative and police are now attempting to get a search warrant.

According to Reid, the suspects could be facing charges including hit and run and vehicular manslaughter, although the investigation is only preliminary.

TurlockCityNews.com will continue to update this case as it develops.