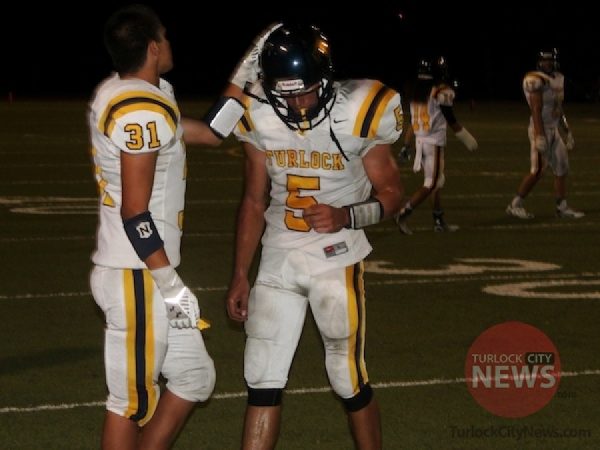 The Turlock High Bulldogs (2-2) came up just short of a second consecutive comeback win Friday night after a tough road loss, 33-28, to the Modesto High Panthers (4-0) at Downey High School.

One of the oldest rivalries in California, it was the 117th time Turlock and Modesto met up and it was the first time in the past five years the Bulldogs lost to the Panthers.

Early on the Bulldogs jumped out to a 14-0 lead thanks to running back Andrew Lopez, who scored on a 33-yard bruising touchdown run and a 20-yard sprint down the middle of the Panther defense.

Unfortunately for the Bulldogs, the Panthers came roaring back from that point on and scored 19 unanswered points.

Late in the first half, the Bulldogs responded to keep the lead 21-19 going into halftime after quarterback Bubba Moreno connected with receiver Jacob Maibe on a 34-yard touchdown pass down the right sideline.

But Bulldogs still had some bite left in them. On the team’s next possession Moreno led the team down the field nearly 80 yards thanks to four consecutive completed passes — the last one being a 10-yard TD pass to receiver Jeffery Hines with 4:02 left in the contest.

The defense forced a punt on the Panthers next possession and the Bulldogs had a shot to win the game with 3:38 left. The drive started at their own 24-yard line and Moreno drove the offense down to the Modesto 32-yard line.

Unfortunately the drive stalled after three straight dropped passes over the middle and the Bulldogs turned the ball over on downs, securing the Panthers’ victory.

Following the loss Bulldogs players commented that as a team they were overly confident coming into the game.

“I’ll tell you I think the defense came out flat tonight, they’ve usually kept us in games until now,” said Turlock Head Coach James Peterson, who also praised Modesto High and their effort. “We just have to get better and make less mistakes.”

Peterson went on to say that despite the loss following the prior week’s upset win over Clovis West, he didn’t feel his team had any sort of let down.

Moreno completed the game with 14 of 26 passing with 211 yards and 2 TDs, along with 47 yards rushing. Lopez was once again the workhorse for the offense, rushing for 116 yards on 13 carries with 2 TDs. Hines finished with 7 receptions for 76 yards and a touchdown. Running back Danny Velasquez had 77 total yards on 5 carries and 4 receptions. Defensive back Brandon Booz had an interception in the game.

Next week The Bulldogs will face the Tracy High Bulldogs (2-2) in Turlock.